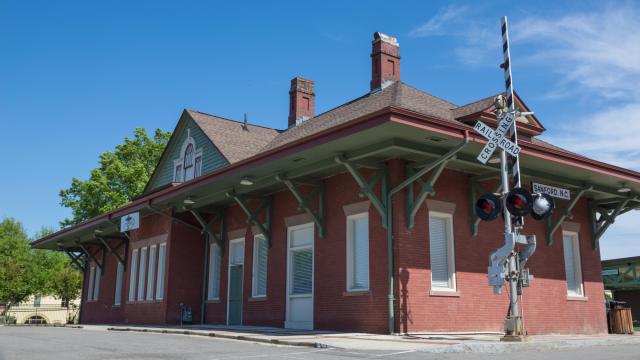 This article was written for our sponsor, Visit Sanford.

Officially incorporated in 1874 and named after the civil engineer who built the town's section of the railroad, Sanford's growth over the years can be credited in large part to its location along the railway.

While the railway is no longer in use in the same capacity as it was hundreds of years ago, monuments to the town's roots have been carefully preserved, including the historic Railroad House, the Railroad Depot and Depot Park.

Now, with the announcement of the S Line corridor, Sanford has the opportunity to build on its roots while also paving a path for the future. The S Line is slated to stretch from Virginia to South Carolina's border, with stops in places like Sanford and Raleigh along the way.

Sanford has long been prepared to assume its historic role as a railway town again, and with the S Line, the stars were aligned in the town's favor.

"We had a plan on the shelf — what we called our East Sanford Redevelopment Plan — and we were poised to take action on that if we were to receive something like a train stop. Since we have a good connection with the North Carolina Department of Transportation, they knew that it would work right into our redevelopment plan," said Mayor Chet Mann, who previously served on the North Carolina Metro Mayors Coalition, an organization made up of mayors from across the state advocating for special interests.

"Since we were a railroad town with some good ideas on how to redevelop around one, I was asked to be the co-chair of the new S Line project with Wake Forest Mayor Vivian Jones," continued Mann. "A lot of aspects lined up that made sense to make Sanford a sort of pilot program."

Since Mann assumed the role of mayor seven years ago, revitalization has been a key focus — and right across the railroad tracks in East Sanford was next on the docket. In preparation for the new rail stop, the town conducted in-depth redevelopment plans and economic studies, putting together a case for why this area of town — which Mann says is growing at twice the speed of anywhere else in Sanford — was a prime opportunity zone.

The site of an abandoned furniture mill offers over 100,000 feet of space for a potential mixed-use development, and the city also owns several adjoining lots with potential for further development. According to Mann, an open space that used to be a ball field is intended to be the anchor of the revitalization project.

"It's a pretty good piece of area, and the nice thing is it's a very short walk to our core downtown — it's like a block from downtown. We have at least the city block to work with and potentially more," said Mann. "We also already have an old depot station that we're turning into the Visitor's Center that is in Depot Park, which is one block from this location, so it will really tie in nicely."

The depot renovations are in the works from Sanford's Progressive Contracting Company, which already has ample experience rehabilitating historic buildings in downtown Sanford. Joni Martin, who served on the committee responsible for the development and building of the Depot Park, is helping to spearhead renovations on the depot building's transformation into a visitor's center.

"We worked in the railroad house before anything was ever done, and the property was not in good shape — everything was overgrown. At that time, kids could play on the train and you would see parents having picnics just on the concrete," said Martin in regards to developing Depot Park. "We knew that this needed to be a park, because people were already coming even though the space wasn't that great. It's in the heart of downtown, and if we restore this area it'll be a great place for people to gather."

Construction on Depot Park was completed in 2005, and what was once a patch of concrete now features a lush lawn, a bandstand, brick-banded sidewalks and an improved play area.

After completing the park, years passed before the city was able to purchase the depot building located on its outskirts. Now that the city has ownership and a new railroad is on its way, Martin and her team have started working on fundraisers to come up with the money needed for renovations.

"In 2019 we did an event called One Table, One Depot, and we served about 250 to 300 people dinner all at one time. Local restaurants came together and prepared all the food together, and then we had some high school students help with serving," said Martin. "We couldn't do the event this year due to COVID, but we have an event planned for April where we plan to sell to-go dinners that people can drive through and pick up."

While the fundraiser hasn't been able to proceed quite as planned, the community remains enthusiastic and supportive of the renovations and the future railway.

"The response has been overwhelmingly positive. People do identify with our train routes and history here, but they also recognize the cool aspect of having a passenger train that you could hop on and off to get to Raleigh and back," said Mann. "At the same time, we've been doing a good job of projecting what the economic and tourism impact could be like in the area, so I think everyone's really excited about the potential."

The rail line also comes on the heels of more big news for Sanford. Two years ago, Pfizer announced a $500 million gene therapy facility planned for Sanford, and new residential developments in the works will double the town's housing inventory.

A passenger rail could help reduce the traffic flow and make Sanford more easily accessible to workers and visitors from across the state, while the park and Visitor's Center will act as a gateway to the rest of downtown Sanford.

"A passenger rail may not be necessary today, but I think as city and state leaders, we're looking at what it's going to be like in 20 years. It could be a very long commute trying to get into Raleigh 20 years from now. These things take time, so you have to start on it today in order to realize it later," said Mann. "These forward-thinking projects will hopefully really bear fruit and pay off the future. Also, there's a bigger picture right now that if this happens, we could potentially be able to go from the South Carolina border to Washington, D.C. on the same rail."

While Mann admits a railway on such a large scale is a long way down the road, he's enthusiastic about Sanford's current opportunity to utilize its roots in stimulating future development.

"We've got such unilateral support that it's fun to see everyone working together for the common good. I see in five to ten years, what is a blighted area now becoming one of the more vibrant centers in Sanford," said Mann. "Sanford just happens to be one of those cities that's on the railway that'll benefit, but I think we're going to see millions of dollars in economic development around it, and that's going to be good for every city that participates."

This article was written for our sponsor, Visit Sanford.