New protocol, along with extraordinary good luck and skill, saves a life 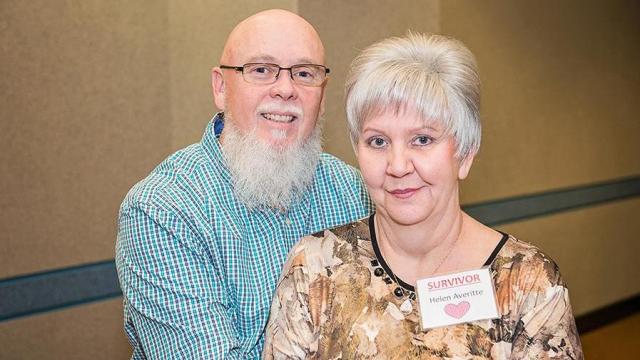 The Friday morning Helen Averitte collapsed in her Fayetteville home began a series of events that ultimately would save her life.

When paramedic Erin Schultz arrived that August morning, she initiated the new protocol for cardiac arrest adopted by Cumberland County Emergency Medical Services, part of the Cape Fear Valley Health System. Helen became among the first patients to be given only one dose of epinephrine when the standard had been to administer a dose every three to five minutes.

Less than a year after Helen's heart arrested, she has no memory of the attack or the week she spent in the Intensive Care Unit at Cape Fear Valley Medical Center. But that memory loss is her only mental deficiency.

Whenever the heart stops beating, all the organs, including the brain, are affected because oxygenated blood isn’t being delivered. A result of cardiac arrest often is reduced mental capacity.

Early results are promising for the new protocol compared with the previous standard, according to Dr. Michael Zappa, chief of emergency medical services for Cape Fear Valley Health System.

"Patients treated with our single dose epinephrine protocol have a similar survival rate but are 50 percent more likely to return to their baseline neurological status at discharge," Zappa said.

Helen is one of the lucky ones.

"Everything fell into place in perfect sequence," Schultz said. The Averittes were known to most of the hospital and EMS staff who treated them because both had served as paramedics and EMS field supervisors. Shultz considers Helen her mentor.

John remembers that August morning began uneventfully. Helen complained of nausea, but an antacid seemed to take care of it. He was paying bills when he heard a crash in the living room. Helen had collapsed. When he stepped through the doorway, John’s years of experience told him in one glance that his wife’s heart had stopped beating and she had stopped breathing.

He called 911, and then his training took over.

"I reverted to what I’ve always done," he recalled. "The husband was still there, but the paramedic had kicked in. Everyone says I’m the reason she’s here. But she's here because God wants her here."

The fire department arrived first and shocked her heart while maintaining CPR. Shultz arrived and administered the epinephrine. On the ambulance ride, Shultz said they got a pulse.

The emergency department had been sent the results of her EKG, and when they arrived, the resuscitation room and cardiac catheterization lab were waiting for her. For more than two hours the resuscitation team worked to stabilize Helen’s heart, which kept coding.

When the tearful staff was about to give up, Helen would lift her hand, and they took that as a sign to keep on resuscitating. Finally, when her heart had a stable beat, she was moved to the cath lab where they found total blockage of the right coronary artery and corrected it with a stent.

Then she was sent to the ICU to wait and see.

John said he was prepared for the worst. Hearts as sick as Helen's usually result in death. He and Helen had talked about their wishes at the end of life, so he was preparing himself to let her go and discontinue life support.

Early Saturday morning John got the call from the ICU that Helen’s pulse was dropping. He called her siblings, and they met in the waiting room outside the ICU. When the nurse asked him to "come quick," he prepared for the worse but instead was met with Helen's gaze.

"Helen is looking at me, and she knows who I am," he said.

By Thursday, Helen was moved to a step-down unit. John should have been able to breathe easier, but he couldn't. He went home to rest, but while sitting on the same couch where Helen had her attack, John started having chest pain and shortness of breath.

He called an EMS colleague, who diverted a nearby ambulance to John’s house. An EKG was inconclusive, but a dose of nitroglycerin helped. John was taken back to the hospital where his wife was recovering and was quietly admitted, without her knowledge.

There, it was discovered his left coronary artery was 99 percent blocked and he, too, got a stent. John was 54 and Helen was 56.

Today, John and Helen are thankful for the medical professionals they met every step of the way. Many were old friends and colleagues.

"We could not have asked for it to go any better," John said.

The lesson for all of us, she said, is that everyone needs to be able to conduct quality CPR.

"Just start CPR," whenever anyone collapses, she said, "and do more CPR and get more family members trained to do CPR."

This article was written for our sponsor, Cape Fear Valley Health