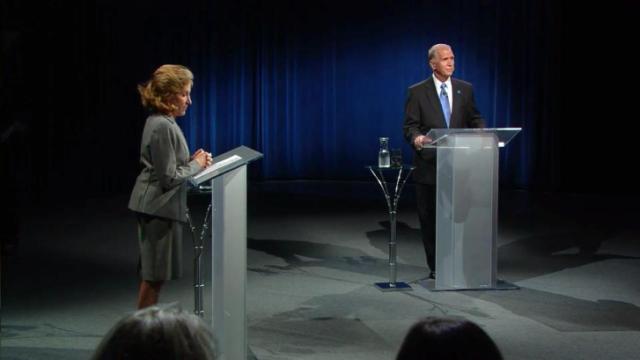 By Mark Binker and Matthew Burns

Raleigh polling firm American Insights, which has Republican ties, had Hagan with a 9 percentage point lead among likely voters.

The polls are the latest in a string showing Hagan gaining ground in the campaign.

"The race has unmistakably shifted towards Sen. Hagan in recent days," said Pearce Godwin, insights director for American Insights, which has Republican ties. "This poll is a continuation and affirmation of the recent trend in her direction. But there is still a lot of time left on the clock, and I would not be surprised if this volatile race shifts back to a jump ball between now and November."

Although the near double-digit lead for Hagan is eye-catching, it's worth noting that the result is still just within the margin or error with regard to likely voters. While the American Insights results confirm a trend seen in other polls, it is still something of an outlier, giving Hagan more of a lead over Tillis than those other polls have shown.

For example, and An Elon University Poll released this morning gave Hagan a 4-point lead, which is much more in line with other recent polls.

The American Insights poll is also the first recent public survey showing Hagan having the edge among male voters.

"We also show her narrowly winning the independent vote, by 1 (percentage point). Most other polls have shown Tillis with an advantage among these groups," Godwin said of men and unaffiliated voters. "However, the most recent surveys have shown his lead among men and independents narrowing, suggesting that this is a real trend at this moment in the race."

The Elon poll gives Tillis a 50 to 38 percent advantage among male voters, while Hagan leads 52 to 33 percent among female voters.

“National polls have suggested the gender gap in voting is narrowing,” Jason Husser, assistant director of the Elon University Poll, said in a statement. “That isn’t the case in North Carolina."

Overall, the Elon poll gives Hagan a 45 to 41 percent margin over Tillis. Five percent of those surveyed remain undecided, while 9 percent favor another candidate – Haugh wasn't mentioned by name in the poll. Hagan's lead is just outside the margin of error among likely voters.

A majority of likely voters dislike the job Hagan has done in Washington, D.C., over the last six years, according to to the poll, but even fewer like the way the General Assembly has operated under Tillis' leadership.

American Insights asked several other questions which may or may not give some insight into the race: