New movies this week: Pride and Prejudice and Zombies, The Choice 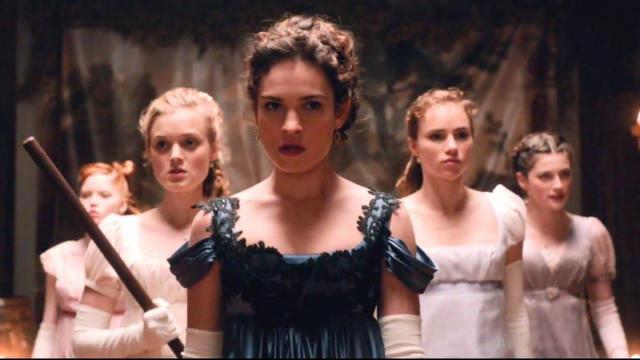 A look at what's new in theaters this week:

The Choice (PG-13, Drama, Starring Benjamin Walker, Teresa Palmer, Maggie Grace, Alexandra Daddario, Tom Welling) - When feisty medical student Gabby Holland moves in next door to perennial ladies' man Travis Shaw, it sends them both on a romantic journey neither ever dreamed possible. Travis has always believed a serious relationship with a woman would cramp his easygoing lifestyle, while Gabby is all set to settle down her long-term boyfriend-until an irresistible attraction between the unlikely couple upends both of their well-planned lives. After a whirlwind courtship, Gabby and Travis wed and build a family together, making every decision hand-in-hand until one of them is forced to make the most important choice of their life alone. A poignant and life-affirming celebration of love, marriage and family that explores the most heart-wrenching question of all: how far would you go to keep the hope of love alive?

Hail, Caesar! (PG-13, Comedy, Starring Josh Brolin, George Clooney, Alden Ehrenreich, Ralph Fiennes, Scarlett Johansson) - In 1950s Hollywood, Eddie Mannix is Capital Pictures' head of physical production and, most importantly, the studio fixer. His job is to maintain the clean reputation of the company and its stars, keeping them free from controversy. Mannix is advised that studio star Baird Whitlock has disappeared after not showing up for work on the current production of "Hail Caesar, a Tale of Christ's Life." He initially believes Whitlock has been drinking, but receives a call from a group of communists who claim to have kidnapped him and want a ransom. As Mannix gathers the cash, he simultaneously deals with an unhappy director who is working on another project, while innocent young starlet DeeAnna Moran is pregnant and unmarried. Mannix must handle all of this while keeping the gossip columnists off the scent. When Mannix is approached by an aviation company with an offer of a less-hectic, and rather lucrative, job, he must ultimately determine his true skills and passions.

Pride and Prejudice and Zombies (PG-13, Horror, Starring Lily James, Sam Riley, Jack Huston, Bella Heathcote, Douglas Booth) - A zombie outbreak has fallen upon the land in this re-imagining of Jane Austen's classic tale of the tangled relationships between lovers from different social classes in 19th century England. Feisty heroine Elizabeth Bennet is a master of martial arts and weaponry and the handsome Mr. Darcy is a fierce zombie killer, yet the epitome of upper class prejudice. As the zombie outbreak intensifies, they must swallow their pride and join forces on the blood-soaked battlefield in order to conquer the undead once and for all.