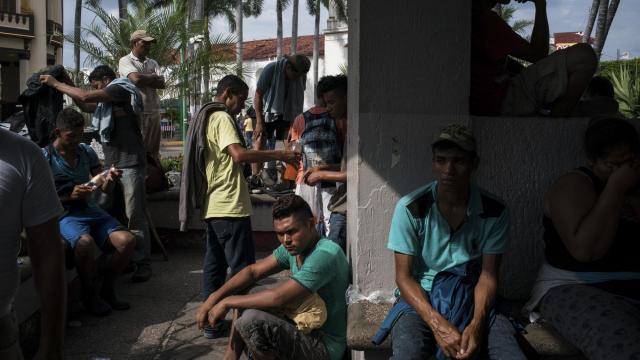 TAPACHULA, Mexico — It was only last week that a caravan with thousands of Central American migrants hunkered down for the night here in Tapachula, in southern Mexico.

Days later, a new group numbering in the hundreds arrived, fanning out across the central plaza and surrounding sidewalks.

Now, two more caravans are on their way, as well.

The fact that the first of these caravans was able to move from Honduras into Guatemala and then into Mexico is inspiring other migrants to travel in large groups, reversing the long-established logic of Central American migration to the United States: Rather than trying to travel undetected, some migrants are trading invisibility for safety in numbers.

“Everybody wants to form another caravan,” Tony David Gálvez, 22, a Honduran farmworker, said Tuesday as he rested in Tapachula’s central plaza after walking into the city with hundreds of other migrants, part of the second caravan to arrive here this month.

But largely unbeknown to the migrants, this conspicuous new approach has been fueling heated anti-immigration sentiment in the United States and putting potential new obstacles in their path.

As midterm elections near, President Donald Trump is trying to energize Republican voters by focusing on immigration, a topic that roused his base during his 2016 campaign.

Trump has described the first caravan, which left Honduras on Oct. 12, as an invading horde. He is sending troops to the border with Mexico and considered taking executive action to close that border to migrants, including those seeking asylum.

Migrants traveling in these caravans are aware that Trump is opposed to their entry to the United States, and have heard about the military deployment to the border. But many say they are driven by a deep faith that once they arrive at the border, Trump will be touched, and open the gates to them.

Migrant advocates like Miroslava Cerpas, from the Center for Human Rights Research and Promotion in Tegucigalpa, the Honduran capital, warn that they might be separated, deported or hurt along the way.

But many of the migrants are deeply religious, and “believe there will be a miracle, that some Moses will appear” to guide them, Cerpas said. “For these people, this is the caravan of hope,” she said. Trump has pressed Central American and Mexican governments to stop the migrants from continuing north, creating a political and public relations dilemma in the region. The embattled presidents of Guatemala and Honduras, both leading governments that face corruption allegations, tried to appease him, ordered security forces to halt the groups — to little avail. The migrants just hiked past the officers sent to stop them.

The Mexican government’s response has been contradictory. Officials appear to be sensitive to the contrast they must draw with the Trump administration’s crackdown on migrants, including Mexican immigrants. At the same time, they are intent on keeping Mexico’s relationship with the United States on solid ground.

The Mexican government invited migrants to apply for asylum, and almost 2,200 migrants have accepted the offer, the government said Wednesday.

“Undocumented migration is not a criminal act in Mexico,” Interior Minister Alfonso Navarrete Prida said earlier this week. “This is a vulnerable population.”

Navarrete warned that migrants should respect the law and present their documents to seek refuge. But it was clear that Mexico lacks the ability to control the flow of Central Americans through their country.

Several migrants who arrived in Tapachula on Tuesday in the new caravan said they had been inspired by the success of the first group, which made its way through Guatemala and into Mexico with relative ease.

The images of this mass migration show the power of traveling together. Young women feel safe enough to push their children in donated strollers along the highway and families cram onto the flatbeds of pickup trucks offering rides. At rushing rivers, people form human chains to wade across.

Together, the trip is also cheaper, said the Rev. Mauro Verzeletti, a Catholic priest who directs Casa del Migrante, a shelter in Guatemala City. By traveling in groups, he said, the migrants can shake off the “structure of coyotes, of drug traffickers or organized crime” that has controlled the trail for years, charging thousands of dollars.

The groups have also been met with an outpouring of support — food, clothing, shelter, medical care — from governments and ordinary citizens along the way. After Trump took office, the number of illegal crossings at the southwest border of the United States declined to a low of more than 40 years. But the numbers began climbing again this year. In September, a record number of people traveling in families were apprehended by the Border Patrol.

But there is no evidence the caravans are encouraging more people to leave El Salvador, Guatemala and Honduras for the United States, migrants’ advocates said. Indeed, many of the people in the two caravans now moving through southern Mexico say they most likely would have migrated whether or not the caravans had taken shape.

What the large group does do is give “visibility to a phenomenon that had been going on for a long time and that nobody wanted to see,” said César Ríos, director of the Salvadoran Migrant Institute in San Salvador, which works with deportees.

When the first of the current wave of caravans left San Pedro Sula in Honduras on Oct. 12, it was only a few hundred strong. As television news spread the word, thousands more migrants joined the procession as it crossed the border into Guatemala and headed toward Mexico.

The migrants clashed briefly with Guatemalan and Mexican security forces on Oct. 19 at the Suchiate River, which demarcates a stretch of the border between the countries. But most of its members crossed into Mexico as efforts to halt the caravan’s advance gave way before its size, estimated then at about 7,000.

The initial group, mostly from Central America, fractured after crossing into Mexico. Some pushed ahead at a faster pace, while others fell behind to convalesce, apply for asylum in Mexico — or return home.

Still, the core group, which was in the city of Juchitán in southern Mexico on Wednesday, numbers in the thousands.

That caravan’s unimpeded progress north has resonated deeply in the impoverished countries of Central America, from which hundreds of thousands of people have fled in recent years to escape violence and political repression, as well as poverty exacerbated by drought and crop failures.

About two weeks ago, a follow-up caravan formed in the central Honduran town of Comayagua. When it left, it numbered about 350, several migrants said. By the time it crossed the border with Guatemala, it had grown to about 1,500.

Together, the migrants overwhelmed the security forces and carried on northward, several said. Even more migrants joined the group as it moved across Guatemala. One of them was Marvin Tol, 35, who is from the Guatemalan city of Escuintla.

He said he had been thinking about trying to migrate to the United States in search of work. But news of the passing caravan — and the success of the earlier one in crossing borders unimpeded — inspired him to accelerate his departure.

“I was planning to go, but I joined with the caravan instead,” Tol said in Tapachula on Tuesday.

A third caravan left San Salvador on Sunday and is expected to reach Mexico’s southern border soon. A fourth formed in the Honduran department of Olancho and is traveling through Guatemala now, said Cerpas, the migrant advocate in Honduras. The Mexican government impeded the first caravan at the legal crossing on its southern border, but thousands of participants made it across illegally, which displeased Trump.

When the second caravan arrived at Mexico’s southern border on Sunday, the migrants were once again met by a show of police force.

A fight broke out after a Mexican police officer insulted the migrants’ Honduran flag, said Sergio Seis, the migration official for the government of Ciudad Hidalgo, which is on the border.

Migrants threw bottles and stones before the police drove them back with tear gas, witnesses said. One migrant was killed.

But on Monday, the caravan’s members formed a human chain and waded across the Suchiate. Mexican marines watched from skiffs but did not intervene, said boatmen and porters who work that stretch of the river.

“It was pretty and it was sad at the same time, because kids were coming and women were coming,” said Juan Carbajal Díaz, a porter who watched the crossing.

A Mexican federal police helicopter hovered closely over the group for at least 10 minutes, its blades whipping the river water into a chop.

Below the rotors stood Delmis Aracely Macedo, 30, who has been traveling with Gálvez, the Honduran farmworker, who is her boyfriend. Fearing she might drown, she began to cry, she recalled.

Then the authorities seemed to relent. Most of the migrants scrambled into Mexico, their illegal entry apparently ignored.

In Mexico, the first caravan has been met by an outpouring of support. But even the migrants were aware that other caravans following their path might not meet with the same welcome.

The caravan is like a house guest, Gálvez said, laughing: “The first day he smells — and the third day he reeks.”