Raleigh, N.C. — Like a game of “Tell me you’re a Raleigh kid without telling me you’re a Raleigh kid,” my 7 year-old son, Henry wore a shirt to school today that says “Bunch of (Little) Jerks.” Most in the Triangle know “Bunch of Jerks,” is in reference to the Carolina Hurricanes’ post win celebration called the Storm Surge. The Canes players’ fanfare caught the ire of NHL commentator Don Cherry in 2019 after he called the players “a bunch of jerks” for the celebration. Fans here adopted the moniker as their own and my son is proud to be a “Little Jerk.”

Henry is even more proud the shirt came with his huge bag of brand new, Hurricanes branded CCM hockey gear for this summer’s Hurricanes Learn to Play: First Goal program. Started six years ago across the league, Learn to Play is an initiative by the National Hockey League and the NHL Players Association. Beginners ages 5-9 can learn the game of hockey in an exciting, safe and affordable way. First Goal participants learn basic hockey skills through drills and games over six weekly sessions in the summer at ice rinks around the state. 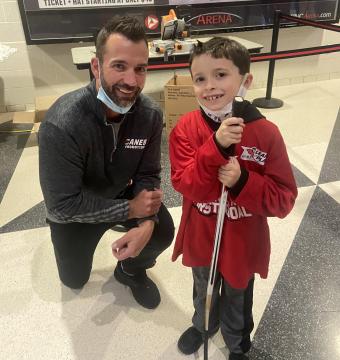 Shane Willis, Manager of Youth and Amateur Hockey for the Canes and a former NHL player believes it’s the best way to spread hockey around the Triangle and across North Carolina. “Our goal is to be the gold standard of Learn to Play hockey and create as many hockey players and fans as possible.” Since 2015, Willis estimates the First Goal program has provided more than 3,000 kids a chance to try hockey. He says families are a big part of the success of the program as they seek to create not just players, but fans. “One new player creates three new hockey fans,” Willis explains.

Triangle families are often anxious for signup in May each year and seek a program spot in local rinks from Cary to Wake Forest. Willis says they don’t want to limit the program to just the Hurricanes’ strong local fanbase. “We want the sport to grow statewide, not just in Wake County,” he says. That’s why rinks in Hillsborough, Greensboro and Charlotte host the program too. The Hurricanes seek to reach military families by welcoming players at a Fort Bragg rink as well. Willis shares the program’s marketing. “This is an area we always look to increase. How do we reach those non-traditional families more each year? We use as many social media outlets as possible and try to make sure parents are informed and welcomed to our sport,” he says.

With corporate sponsors and funding from the NHL, a sport with the reputation of needing a lot of costly equipment becomes more affordable. The bag Henry received when fitted for his gear is big enough for him to fit inside, but is made for all his pads, his helmet and skates. The $250 registration fee covers six weeks of instruction, all equipment, a jersey, a T-shirt (Little Jerks), membership to the Hurricanes Hockey Kids Club and two free tickets to an upcoming Canes game for families to continue being fans. 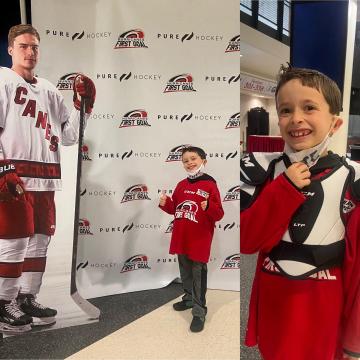 I had emailed Willis before signup to make sure I wasn’t missing anything. I had heard that like other popular kids’ programs, slots fill up quickly, so I wanted to be on top of things for signup. He recommended I enroll Henry in basic skating lessons before the First Goal program began in July. While not necessary, because the program is for beginners, it did help him feel more confident on ice skates before putting on all the hockey gear for the first time.

We didn’t know what to expect when we joined other families at PNC Arena at Henry’s designated time slot for a fitting, but we were beyond impressed with the organized and welcoming atmosphere. Pure Hockey employees enthusiastically greeted Henry by name and congratulated him on becoming a hockey player before handing him an iPad with a visual check off list. He carried it from the chest pad station to the stick taping area and every socially distant stop in between around PNC. Henry checked off all the gear he would need on the iPad after an expert showed him how to put each piece on and have it fit correctly. 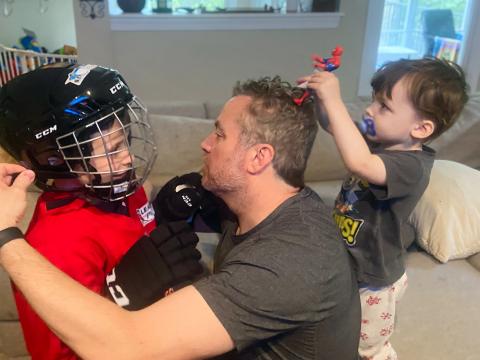 After counting down to his first day of hockey, my husband helped Henry get all his gear on before heading to the rink. With each child’s name on their helmet, and armed with little sticks, the new hockey players took the ice with all the wobbly enthusiasm a bunch of little jerks could have. 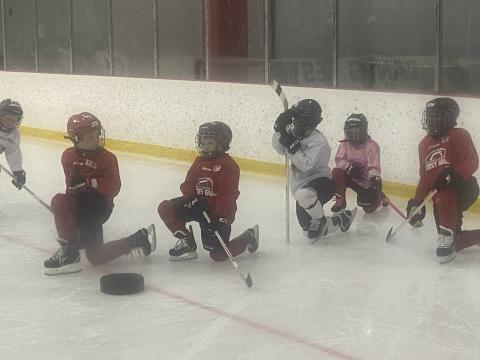 Parents watched the kids be divided into groups to work on beginner skating drills and puck shooting games. My favorite part was watching the cutest thing on two skates turn and give us a thumbs up while out on the ice, but a close second was watching the excitement the coaches had for this new generation of players. Willis says, “This program allows all our coaches to feel like a kid again and remind us of the WHY! Why we love the game of hockey and why we come out every week to help coach these future stars. To see their smiles, their determination, their willingness to overcome fears and to watch them fall in love not only brings us back to our childhood but gives us absolute joy in what we are doing.” 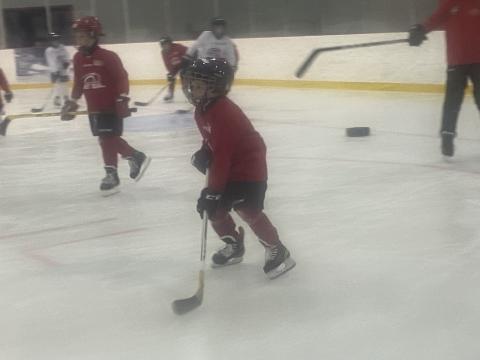 When I say I couldn’t believe the progress he made over six weeks, I mean I can’t believe it. Henry went from never having skated with a hockey stick, to picking up speed to shoot pucks into the goal.

At the end of the summer, with their certificate of completion, each new hockey player got a recommendation for their next steps in the sport. After the First Goal, players move on to KinderCanes, Lil’ Canes 1, Lil’ Canes 2 or Canes Girls Youth Hockey depending on age and ability. Henry is a 7 year-old second grader and just had his first practice as a Lil’ Cane in Lil’ Canes 1! The Carolina Junior Hurricanes league continues the sport for athletes as they get older and more advanced.

Sign-ups - I know we hear it for every kids’ camp and program out there, but seriously, be on top of registration. First Goal signup comes around in early May, (Check the website.) with equipment fittings in June and the six week program through July and into August.

Communication - Willis explained their goal of a gold standard program and that’s what you get! Expect many informative emails. Personally, I like the weekly updates during the program to make the process enjoyable for each athlete and keep parents in the know.

Gear - My husband grew up playing hockey in Colorado and understands putting all the gear on. I didn’t know what I was doing and I’m still not confident. I had to practice. When he was unable to take Henry to practice one week, it was all on mom to get the gear on. Practice before practice! Those skates need to be tighter than you think.

Safety - Okay, they fall. They’re kids on ice. Many for the first time. Now, if I fell on ice, I’d be down until someone picked me up and it would likely take days of ibuprofen to recover. Kids? Psh! They hop right back up, especially with all the gear. Henry got great laughs as his siblings hit him on the chest or head with some item or another in the living room while wearing his gear. He would shout between hits, “It doesn’t hurt at all, Mom! I can’t even feel it!” Also, I heard a parent with a second child in the program explain that it’s important for them to learn how to fall and get back up safely.

Cold - As a Triangle native, I think I was naive as to how cold hockey practice would be. I’ve been to plenty of chilly Canes games at PNC, but there’s a crowd, beer, snacks and cheering to keep you warmer. North Carolina moms know spring and summer baseball or soccer days can be sweltering, but if you’re a new hockey mom, dress accordingly. This is from my Instagram story: 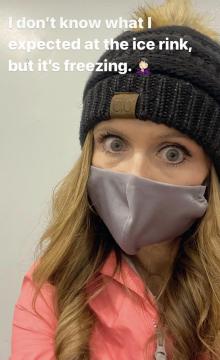 During his first Lil’ Canes 1 practice yesterday, my husband sent me a video of Henry skating backwards! Huh? When he was a baby with his stuffed animal of the Canes’ mascot, Stormy, I don’t think I ever pictured him skating backwards confidently with a hockey stick. It’s been amazing to watch him find a sport he enjoys. We obviously have no idea if he will stick with hockey, but the First Goal program was the perfect start to his time on the ice with a bunch of other little jerks. 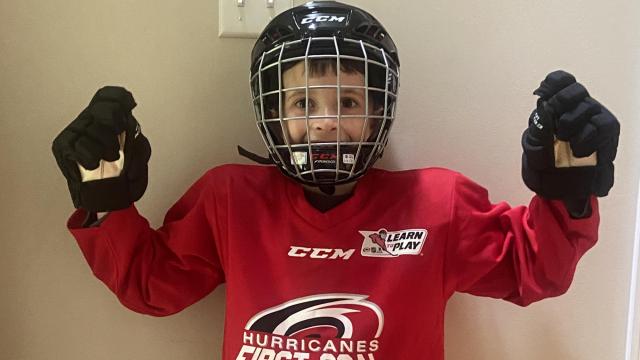 Amy Davis is a monogramming mom of three and fitness instructor with FIT4MOM Midtown Raleigh and web contributor for the historic Village District. She is a regular Go Ask Mom contributor.