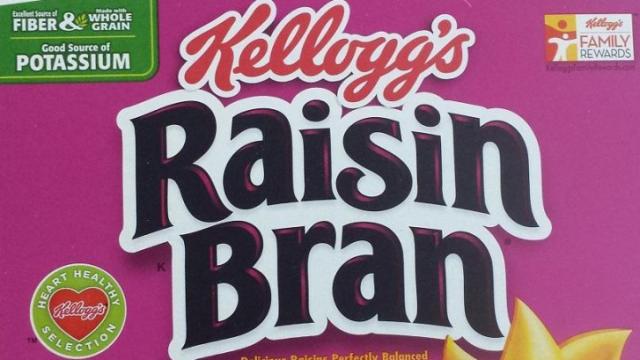 Kelloggsfamilyrewards.com is offering a great new $5 cereal rebate on their healthier cereals! See below for a couple scenarios on how to make your cereal better than FREE!

Here's how it works:

1. Buy 3 specially marked participating Kellogg's cereals. Look for the rebate information on the outside of the box so you know you have the right cereal.

2. Get the codes from inside the box and enter them at Kelloggsfamilyrewards.com.

3. Once you have entered 3 participating codes, you will receive a $5 reward by check in the mail.

If you couple this rebate with a good cereal sale AND the .75/1 or $1.50/1 coupons from Kelloggsfamilyrewards.com when you redeem points, you will be able to score some great deals in the next couple months!

Harris Teeter Scenario: Special K Original cereal is $3 at Harris teeter through 10/7.  Use 3 of the .75/1 coupons from their website when you redeem reward points and pay $4.50 at the register.  Then, get back $5 from Kellogg's rebate. Total after 3 coupons doubled and rebate = FREE! (.50 money maker!)

Walgreens Scenario: Kellogg's cereals, including Raisin Bran, are on sale for 3 for $6 at Walgreens through 10/11. Use 3 of the .75/1 coupons from their website when you redeem reward points and pay $3.75 at the register. Then, get back $5 from Kellogg's rebate. Total after 3 coupons doubled and rebate = FREE! ($1.25 money maker!)

If you are new to KelloggsFamilyRewards.com, it's a free program sponsored by Kellogg's that allows you to get free coupons and other items by entering the codes on participating products into their website. Once you earn enough points from entering codes, you can redeem them for various things like printable coupons.  I often cash my points in for .75/1 coupons that will double at Harris Teeter and Lowes Foods.

There are a ton of participating products and you can see this list on Kelloggsfamilyrewards.com.