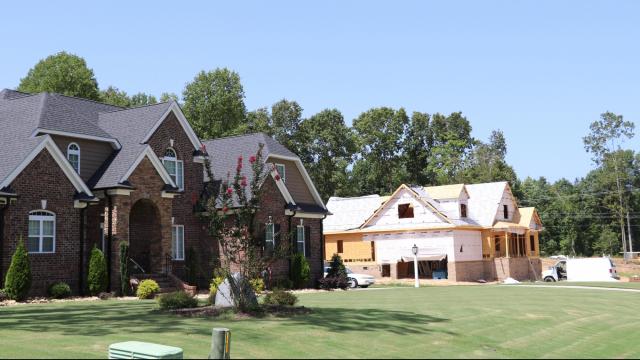 The housing boom in North Carolina isn't just confined to the Triangle area. In fact, as the real estate market continues to heat up across the state, more people are looking to smaller communities for affordable housing and quiet living.

"Nash County is now in a position to develop and build its economy based on remote workers, mobile professionals and families as well as businesses seeking the enjoyment of freedom and flexibility in a low-cost location with outdoor amenities," said Andy Hagy, Nash County economic development director.

With several new developments already in the works, Nash County is getting ahead of the curve.

"Nash County is an amazing little gem right outside of Raleigh, and I feel like it gets overlooked sometimes, but that's starting to change," said Tammy Eickhoff, a realtor with Keller Williams Realty. "We've got small communities that are really embracing and welcoming this growth. Developers are finding that there's some affordability in this area, and the county and community have been genuinely excited to partner with these developers."

The first is the Beaver Creek subdivision in Middlesex, North Carolina. The development is slated to bring an additional 70 new homes to the area, all of which will be in the high $200 thousands price range to the low $300 thousands.

The Beaver Creek neighborhood is located right along its namesake and developers are working with the Army Corps of Engineers to create a nature trail within the neighborhood. Already, seven acres are reserved for these trails, as well as picnic shelters and additional green space.

"It really is a great neighborhood for either entry-level homes or maybe second homes," said Eickhoff. "It's a great area for families to get outside, take walks and just be able to do something together without actually having to leave their neighborhood."

The second subdivision Eickhoff is working on is the Farm at Red Oak with local developer Marvin Shearin.

Located right off of I-95 and I-64, the subdivision is situated on a working farm, where crops rotate throughout the year.

"I am in love with this community — it's spectacular. We currently have peanuts planted all around the subdivision, and it's an ever-changing background. The entire community can go from spring wheat to peanuts to winter wheat in one season, so it's very dynamic," said Eickhoff. "Prices in that subdivision are starting in the high $300s, and we currently exceed the $550 thousand price point, so it's a little higher than Beaver Creek."

As far as amenities go, Eickhoff sees the farm itself as one of the most unique developments on the market.

"We haven't developed any residential amenities yet, but there are so many possibilities with this community that we're exploring," she said. "To be honest, I feel like one of the most notable amenities is the scenic simplicity of the actual subdivision itself — just the ability to get away from the hustle and bustle and enjoy the natural beauty."

Beaver Creek and The Farm at Red Oak are just two of the handful of current developments springing up around Nash County. Builder and developer Tom White is working on projects in Spring Hope and Southern Nash County, the former of which is the 47-lot Walnut Cove.

White also has plans to create another high-end development in the county sometime in the future. While he previously focused on Wake and Johnston County, he found himself drawn to the potential of Nash County.

"We have over 200 lots under development in Nash County right now and several others in the works over the next year or two. I grew up in Clayton back before Clayton was big, and I always enjoyed that farming, small-town lifestyle. A lot of what we're seeing in Nash County reflects that same community aspect," said White. "We've noticed in Nash County that people really get to know their neighbors, even as they move in and it continues to grow."

Both Eickhoff and White expect to see those prices increase as growth continues in Nash County. For homebuyers, now may be the time to capitalize on lower prices and an ever-growing inventory.

"We're hoping that by next year, we will have communities at almost every price point," said Eickhoff. "My goal is to be able to say, ‘Well if that vision doesn't work for you, then we've got a great home over here for you,' from one end of the county to the other. And I fully expect that by next summer, we will be able to say that."

For White, the ease of access to major roads like I-95, future I-87 and US 264 will only continue to make Nash County a hotspot for warehouse distribution. As the county grows industrially, so will the population.

"I think we'll start to see the price points grow exponentially in Nash County over the next couple of years, because as we continue to develop more, the towns are going to keep growing, and we're going to have a lot more amenities available," said White. "For buyers, it's a great opportunity to get in and really build some equity over the next 10 to 15 years."