Durham, N.C. — Dozens of Durham property owners are weighing their options as the state moves ahead with plans to build a long-awaited highway, known as the East End Connector, right on top of their properties.

Improving travel versus taking private land is the trade-off of every major road project, and the state Department of Transportation will soon start the difficult process of buying the land or taking it by eminent domain.

The nearly $200 million project will have eight lanes to connect N.C. Highway 147 and U.S. Highway 70. The connector and related widening will tie in Interstate 85 from the north to Interstate 40 and beyond. It will also ease heavy truck traffic on downtown Durham streets.

If land acquisition goes as planned, East End Connector construction is set to begin in about two years.

“This is the last missing link that ties all this together with each other and with I-85. It's a critical link for our freeway system. We need it for our future,” said Joe Milazzo, with the Regional Transportation Alliance. “It's been the top priority of the City of Durham, Durham County, Durham Metro Planners (and) the Durham Chamber.”

The progress comes at a price. Just south of East End Avenue is Durham's Hayestown community. More than 150 parcels of land will be impacted by the connector. Twenty-one homes and 15 businesses must go.

Rev. Sylvester Williams said he believes nothing good can come from the project.

“These are places where African-Americans have historically lived in the city of Durham. They're all being displaced,” he said.

Jim Lindsley, who owns a waterproofing business, will see a third of his property shaved off by an expanded cloverleaf right-of-way. He says he wishes the DOT would have considered alternative ideas.

“I don't have a problem with the greater good,” Lindsley said. “My biggest concern is that they're not going to make an offer that will enable us to make the transition.”

DOT engineer Wally Bowman says property owners are impacted with every major road project and that he can’t “make everybody 100 percent happy.”

“We’re trying to do the best we can,” he said, urging property owners to be patient.

“We can't settle with everybody at the same time,” he said. “We're going to offer you what the fair market of what your property is today.”

The North Carolina Eminent Domain Law Firm is holding an informational meeting on property owner rights at 7 p.m. Thursday at the Downtown Durham Marriott. The DOT is holding another meeting next Tuesday from 4 to 7 p.m. at Orange Grove Mission Church. 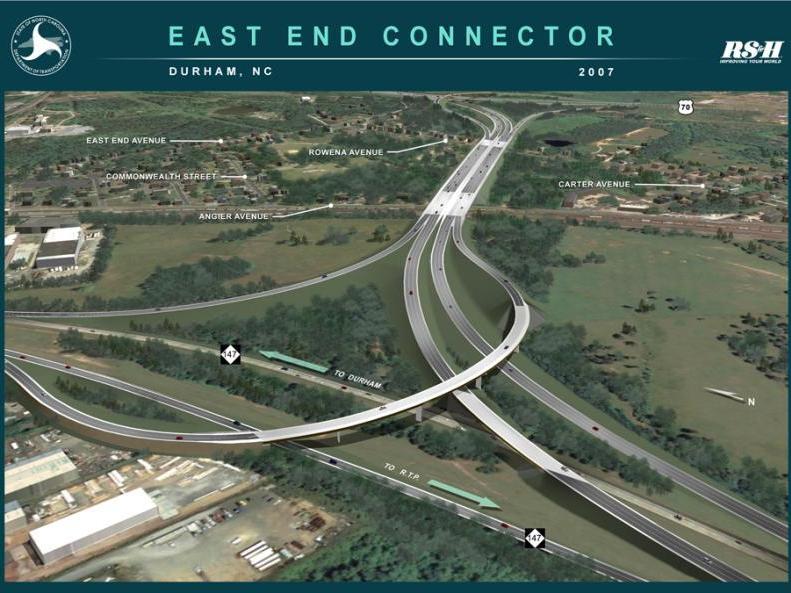