New Gatekeeper for Trump? They’re Not Breaking Down the Door 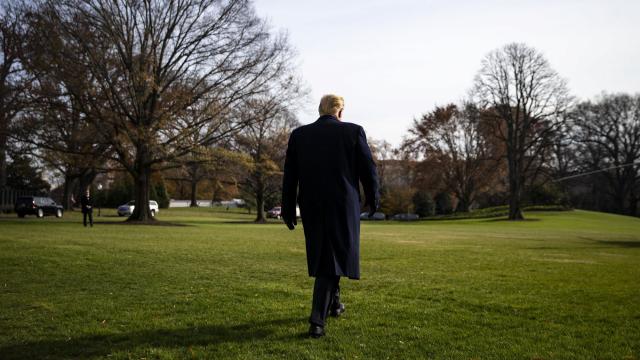 WASHINGTON — President Donald Trump has often bragged about having his pick of only the best people to serve in his administration.

Being publicly rejected by his first choice for chief of staff — and embarking on a very public search for someone else — has made Trump’s claim harder to back up.

A shortlist of last-ditch possibilities has emerged, including family-vetted officials like Treasury Secretary Steven Mnuchin and Robert Lighthizer, the U.S. trade representative, but only one possibility — Rep. Mark Meadows, the hard-right Republican congressman from North Carolina who is so far not quite inside the Trump children’s circle of trust — has voiced interest.

After Nick Ayers, the Georgia political operative who was the president’s top pick, declined the job — something of a plot twist in a presidency notorious for its episodic cliffhangers — Trump is without a Plan B. Several of his aides expressed frustration that months of intense campaigning to replace John F. Kelly — an effort led by Ivanka Trump and Jared Kushner, the president’s elder daughter and son-in-law — resulted in yet another chaotic staffing scramble in a White House splintered by factions and rife with turnover.

“Why would anybody want to be Donald Trump’s chief of staff unless you want to steal the office supplies before they shut the place down?” said Chris Whipple, who wrote a book on White House chiefs of staff called “The Gatekeepers,” expressing the views of many outside the White House about Kelly’s job. “If you’re coming into that job, you’ve got to lawyer up.”

Trump faces a week marked by negotiations with Congress over a possible government shutdown and difficult negotiations over the funding for his long-promised border wall. But on Monday, according to several people close to the administration, the president was more focused on his success in dispatching Kelly than on his anger at Ayers.

Ivanka Trump and Kushner’s efforts on behalf of Ayers were widely seen as a coup attempt, started on behalf of a president who was unhappy with Kelly but could not bring himself to fire him. Ayers’ rejection of the offer stunned the couple, who had long resisted Kelly’s attempt to bend them to a traditional White House hierarchy.

But for Trump family members, the debacle amounts to a survivable setback. And the couple are now back to assessing a last-ditch list of possible candidates.

Others who know Donald Trump hinted that the president dislikes being embarrassed, and that the abruptness of Ayers’ rejection might not have worn off. After all, aides to Trump and Vice President Mike Pence had been preparing as recently as Sunday morning for Ayers to take the job, and for another aide, Jarrod Agen, to temporarily assume Ayers’ current duties as Pence’s chief of staff.

To make room for Ayers, Trump, who famously avoids one-on-one interpersonal conflict, had been trying for awhile to pull the trigger on firing Kelly. Famous for the “You’re fired!” catchphrase and also for hating confrontation, Trump had looked for others to do the work for him last week — even attempting to arrange for Ayers to fire Kelly — according to three people familiar with the events.

Finally, Trump persuaded Pence and Ayers to join him in hashing things out with Kelly in the presidential residence Friday night. But instead of sticking to the plan to let Kelly leave with dignity, which Ayers and others in the White House had urged the president to do, Trump decided to announce it himself Saturday.

Finding a replacement for Kelly is in many ways just the latest staffing snare in a White House that has struggled to fill even low-ranking jobs. Staff turnover for senior aides, according to the Brookings Institution, sits at 62 percent.

“After two full years, Obama was at 24 percent turnover of his senior staffers,” Kathryn Dunn Tenpas of Brookings said in an interview. “George W. Bush was at 33 percent. In a way, instability breeds instability.”

But the chief of staff job is often described by those who have had it as the worst in Washington, even when times are good.

Leon E. Panetta, who had the job under President Bill Clinton, said the Clintons squired him to Camp David to work on him to leave his job as the director of the Office of Management and Budget. Panetta recalled Clinton’s clincher:

“'You know, Leon,'” Panetta said Bill Clinton told him, “'you could be the greatest OMB director in the history of the country, but if the White House is falling apart, no one will remember you.'”

Mnuchin is in a similar position. He has earned the confidence of the president and his children from his time on the 2016 presidential campaign, and his name has been floated repeatedly as Kelly’s successor. But a person familiar with Mnuchin’s thinking said he was more interested in keeping the job he has now.

Meadows, the hard-edge chairman of the conservative House Freedom Caucus, is also in the running for the job. He does not enjoy the same confidence of the Trump children that Mnuchin does. But he is the only person to express public interest in replacing Kelly.

After keeping silent much of the day, Meadows told reporters Monday evening that he was not “campaigning” for the job but would be “interested” if an offer were made.

Asked by a reporter about the infighting and “constant shivving” among White House staff, Meadows unexpectedly broke into laughter.

“Sorry about that, you just caught me funny,” he said. “Listen, I don’t worry about palace intrigue as long as I am not part of it.”

Lighthizer, another replacement option, has a good relationship with Kushner, West Wing officials said, but he has little experience in the type of administrative duties the job would require.

Other options range from the possible — including Mick Mulvaney, director of the Office of Management and Budget — to the unlikely, including Chris Christie, the former New Jersey governor and head of the Trump transition team, who angered Kushner for sending his father to jail during Christie’s tenure as the state’s attorney general. Trump, who enjoys embarrassing reporters and planting his own information about staff machinations, has mentioned several other names. They included Matthew G. Whitaker, the current acting attorney general who nearly every West Wing staff member has said could not be a realistic option, but who Trump likes personally.

Some White House aides made the same point about Ayers, who has never faced extensive scrutiny of his finances or his previous political work. They said those questions were almost certain to come if he ascended to the higher job.

That included not just his personal fortune — worth somewhere from $12.2 million to $54.8 million — but also his tenure as executive director of the Republican Governors Association and working for Eric Greitens, the former governor of Missouri, who resigned in disgrace after a woman accused him of physically abusing her during a nonconsensual relationship.

Kushner wants Ayers to take over running the super PAC backing the president, which people close to Trump believes needs the kinds of fundraising boost Ayers can provide. Such a move would keep him in the Trump orbit, which Trump’s children in the White House want.

Kelly, meanwhile, is said to be furious with Ivanka Trump and Kushner. One senior administration official said Kelly was known to have kept written notes about Kushner and Trump and the things they had done or requested, which he conspicuously left on his desk in view of his staff.

Donald Trump, who was said to be distrustful of Kelly’s personnel judgment, will not be consulting Kelly on his successor, people close to him said. Still, Kelly returned to the White House in his role Monday, and attended a meeting with the president.