Held at Dorton Arena, members of the media got a chance to sample some of the new food offerings and find out what's new at this year's fair, which starts Thursday.

For the first time, fairgoers will be able to walk underground. Crowds will be able to use the pedestrian tunnel under Trinity Road to get from Carter-Finely Stadium to the state fairgrounds.

While free parking is available at Carter-Finley and PNC Arena properties, there are also some private lots nearby that charge various prices. Fairgoers can also skip the hassle and take advantage of park-and-ride options with GoRaleigh, GoDurham and GoTriangle.

Headed to NC State Fair? Here's how to get there and save on parking

Not everything is deep fried 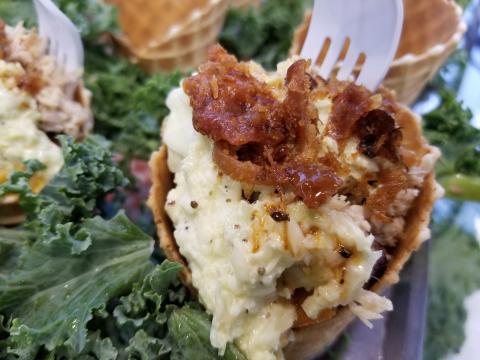 One of the hottest items at the media luncheon was the Crack-n-Cheese in a Waffle Cone by Hickory Tree BBQ. The waffle cone was stuffed with mac-n-cheese and then topped with turkey barbecue, cole slaw, turkey cracklings and their signature barbecue sauce. While the combination might sound like too much, the end result was a blend of southern goodness. Plus, you can walk around and eat it - which is always a plus with fair food. Hickory Tree is also offering a Thanksgiving Turkey Chop Sandwich featuring deep fried turkey, gravy, dressing and cranberry sauce.

Cool Runnings Jamaican nabbed the "Media's Choice for best New Food at the Fair" for its Jerk Pork Wrap with Mango Sauce. Sweet and spicy, this wrap was the perfect balance of flavors, and that mango sauce is really good. 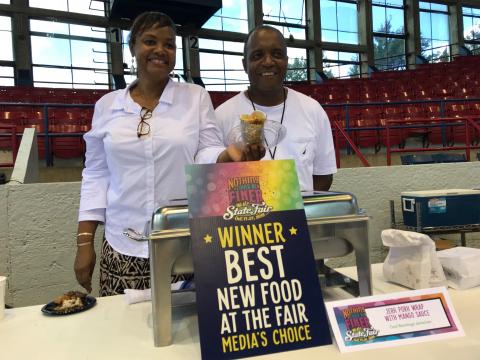 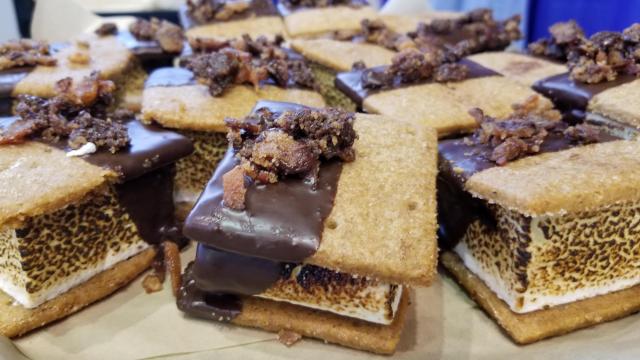 Deep-Fried and loving it

Woody’s Sports Tavern & Grill loves to feature unique egg rolls and this year they are stuffing them with North Carolina farm-raised shrimp and stone ground cheese grits with tasso ham. Make sure to get the red pepper remoulade sauce on top for some sweet heat.

Chick-N-Que, which also has a popular food truck, served up their Cluck Puppies. A twist on the traditional hush puppy, this dish contains chopped chicken barbecue.

Ragin Cajun is going all in on hush puppies this year with two different types. The savory country ham and cheddar cheese and the sweet chocolate chip hush puppies covered in chocolate gravy and powdered sugar.

The fair will be added four new rides, including the Dumbo Elephants, this year. Thrill seekers can also check out the Kraken (similar to the Spider), mini trooper (a smaller version of the paratrooper ride) and Downdraft, which swings riders high above the Midway.

In addition to the rides, there will also be new entertainment at the fair. The Canine Stars, a dog stunt show, will be performing daily at the Rand Grandstand. The Dream City Ladybugs, which can be found roaming around at the Flower and Garden Show, are humans dressed as bugs and ready for photo ops. A Fire Safety Show that includes puppets and clowns will be held daily at Kiddieland. Steve Trash's Green Street Magic Show will feature eco-illusions, magic tricks and comedy daily on the North Dorton Lawn.

Kachunga and the Alligator Show, which will be performing near Gate 1, will include a man wrestling an alligator, while the Paul Bunyan Lumberjack Show at the N.C. Forest Services Area will include real-life lumberjacks throwing axes, chainsaw carving and log rolling.

Headed to the NC State Fair next week with kids? 8 ways to make your trip fun and educational

The State Fair runs Oct. 11-21. Tickets are currently on sale. Those purchasing tickets online will have the option to donate to the Food Bank of Central and Eastern North Carolina as they continue to offer relief to those affected by Hurricane Florence.

Visit WRAL at the State Fair
SUGGEST A CORRECTION