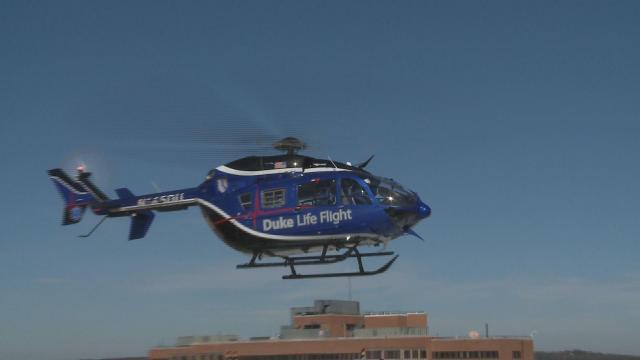 Duke Hospital’s newest Life Flight helicopter is an intensive care unit in the air that boasts state-of-the-art technology inside.

But the most noticeable change is in the rear hatch.

“What our aircraft has that no other aircraft has is a big 35-and-a-half inch opening here that allows us to carry pretty much any size patient,” said Henry Ward with Duke Emergency Services.

“And once they're on the stretcher, there's no more transferring the patient from bed to bed, or bed to a stretcher,” Ward said.

Once the patient is secured and the helicopter is in air, there's more room for nurses to help the patient.

“Unlike a lot of aircraft, our nurses have full head-to-toe access to the patient from a seatbelted position,” Ward said.

A crew of two critical care nurses and a pilot is housed just off the flight deck, “so they can come out immediately when there's a call,” he said.

On a recent mission, the crew headed to Jacksonville, N.C., to transfer a newborn in need of Duke's neonatal intensive care.

It was a beautiful day for flying, but the aircraft is equipped to deal with foul weather. There’s a guidance system that helps with flying and landing in low visibility.

“This aircraft is built with every feature that's recommended by the FAA - and then some,” Ward said.

Even when they leave the pad, the air crew is never alone.

“We also have satellite tracking in this aircraft - our communications center downstairs that's watching our every move,” Ward said. “They know everything we do before we do it sometimes.”

Duke’s Life Flight is a large operation dedicated to flight safety first, and now it has the ability to help more patients get the emergency care they need.