New coalition on left presses inequality issues during pandemic, beyond 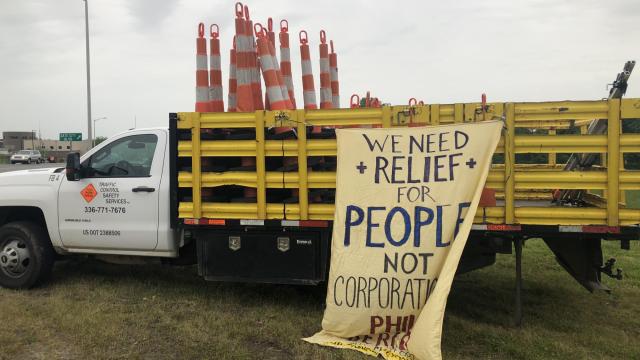 Raleigh, N.C. — A new coalition of left-leaning groups came together over the last month and a half, and it's pushing state leaders to address economic inequality as government responds to COVID-19 and longer term.

The group, NC United for Survival & Beyond, lists some 200 organizations as members. Many are smaller grassroots operations, but some are larger players in North Carolina politics, including the North Carolina Association of Educators, the state's AFL-CIO branch and the Sierra Club.

The coalition also organized a banner drop targeting Berger earlier in the week.

Berger's spokesman said the senator was in Raleigh Thursday "quite literally on the phone with Senate Democrats writing a consensus COVID-19 relief bill" while "professional malcontents were parading in front of an empty house to make some sort of unintelligible political statement."

"I’ll let your viewers decide which side is seriously responding to a pandemic and which side is making fools of themselves," spokesman Pat Ryan said.

The coalition lists among its members a number of newer groups that rose up on the left in recent years, including Indivisible chapters, part of an activist movement that grew out of the 2016 election, and FLIP NC, which came together in 2018 and keyed on state legislative races.

For some groups, membership may be as simple as having signed on to the coalition's platform.

The group has a heavy focus on immigrant rights, with a long list of priorities calling on government to address injustices that amplify the economic crash's impact on people who can least afford it. Their top priorities are expanding Medicaid to provide health insurance long-term to North Carolina's working poor and ensuring "free and widespread testing, treatment and medication" for COVID-19.

Medicaid expansion remains unlikely to move in the coming legislative session, but free testing and treatment is something state and federal leaders have backed for people who meet income thresholds.

The group also wants prison system reforms, including an end to cash bail, assistance programs for immigrants regardless of legal status and an end to state cooperation with federal immigration enforcement.

"At this point, it is impossible to extract the crisis caused by COVID-19 from the massive social and economic inequality that laid the groundwork for the disproportionate spread of devastation we can anticipate in our state," the coalition says on its website. "Our way forward, therefore, must prioritize solutions that rectify both."

The coalition emerged in March, calling on Berger in particular to move the April 28 legislative session up in the calendar. It stepped things up this week, unveiling a series of banners targeting Berger in Raleigh, Durham, Greensboro, Asheville, Charlotte, Wilmington and Fayetteville on Thursday.

The banners said "We need relief for people not corporations, Phil Berger."

Jessica Finkel, who sent out releases for NC United this week and works with Sunrise Movement Charlotte, said NC United doesn't have centralized leadership, and it's not organized as a 501(c) like some social activist groups.

"It's more of a collection of 200 organizations each with their own leadership teams," Finkel said in an email.

WRAL News confirmed membership with spot check calls to half a dozen of the groups.

"It started out as, 'Let's make sure we're getting resources to people who need resources,'" and it evolved into a campaign targeting the General Assembly, said Eleanore Wood, of Progress North Carolina.

"Everything from Medicaid for all to expansions in voting access," said Sailor Jones, of Democracy North Carolina.

NC United's Thursday press release called on the General Assembly, which goes back into session Tuesday, to "take action for our communities’ survival now, or we shut it down.”

Asked what that means, Finkel said it's a nod toward November.

"The idea is that we are pushing for a lot of our local and state representatives to take action now," she said. "(Or we will be) trying to get them out of office and putting more people in office that care about their constituents."