“I'm going to miss it,” said Kaila Hilverzing as she watched the sunrise through the steel girders with Matt Jones. “I love the small town vibe of it.” The young pair have never known a time without the 6-decade-old bridge.

The State of North Carolina retired the old swing-style draw bridge Tuesday afternoon. It was replaced with a new $53 million high-rise bridge. Boats can now easily pass underneath, keeping cars and trucks from having to stop for an open drawbridge. The new bridge also incorporates a concrete barrier in its design to keep pedestrians and bicyclists safely separated from traffic.

Despite the rainy year and Hurricane Florence, the new bridge opens 285 days earlier than expected. The contractor will receive a bonus of $10,000 for each day ahead of schedule.

“I've brought my children here every summer. I brought my grandchildren here. This is iconic,” Balance said, calling the bridge her connection to time gone by.

“This is a dying era of simplicity and quaintness. I hate to see her go,” she said.

For a final time, gears began to grind and a loud siren blared as the stop arms dropped, signaling that the bridge was open for boat traffic. It's a process that happened at least once an hour during the day for decades. Stopped in traffic, Steve Jacobs said, “I can't wait to see that new bridge come out. I don't want to get stopped no more.” 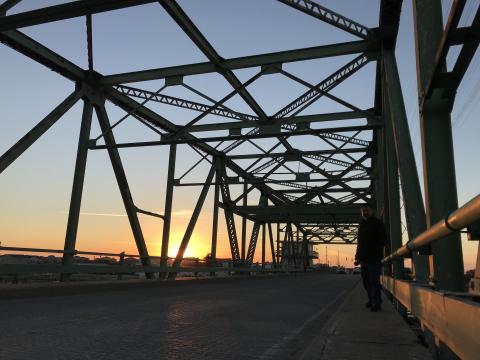 Standing at the apex of the new high-rise bridge, Lynn Farrell was one of the VIPs in attendance for the ribbon cutting on the new concrete structure.

She modestly said, “I was a bridge operator at the Surf City swing bridge.” In fact, she has the longest tenure of any bridge tender working on the old swing bridge. “Altogether, it will be 23 years at the end of the month,” Farrell said.

She retired from the job but has been working as a fill-in when other bridge tenders were off.

“I've enjoyed every minute of it," she said. "I know it's progress, but I'm still going to miss the old.”

Trudy Cook lives near the new bridge and walked to the middle for the opening ceremony.

The day brings bittersweet feelings to the coastal community.

“It's going to change the scenery for sure,” Kaila Hilverzing admits, but Matt Jones interrupts to add, “But you gotta welcome the change, yeah.”

With a tear in the corner of her eye, Kay Ballance realizes progress can't be stopped. “Time marches on, doesn't it?”

Clutching her camera and taking pictures, she will now have only memories and photographs of the bridge she crossed so many times.