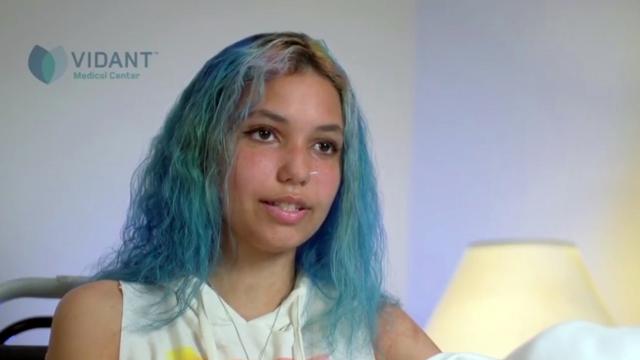 Greenville, N.C. — The New Bern teen who survived a shark attack but lost part of her left leg and suffered other injuries to her hands in the process was released from the hospital on Wednesday.

NBC affiliate WITN reported Paige Winter, who survived the shark attack at Fort Macon State Park's beach on June 2, was released from Vidant Medical Center in Greenville on Wednesday. She will still require physical therapy and other doctor visits, but she seemed in good spirits during a celebration held for her at a New Bern restaurant Wednesday night.

The City of Havelock's Fire and Rescue Department posted photos on its Facebook page of Winter standing with a walker and surrounded by family and supporters Wednesday.

In an update to supporters on the family's GoFundMe page, Winter's father, Charlie Winter, thanked the community for all the well wishes and praised his daughter's ability to pick herself back up after the attack.

"She's strong, determined, delightful, and optimistic all in one little package," Charlie Winter wrote. "She's got work to do, but so much has been done already."

From the hospital last month, Paige Winter encouraged supporters to get involved in efforts to preserve and protect the oceans, repeating the phrase she told her father while she was en route to the hospital: "Sharks are good people."

Atlantic Beach firefighters and paramedics responded to Fort Macon State Park on June 2 in response to the attack. Charlie Winter said he punched the shark several times to stop it from biting her. He's a paramedic and – in a press conference on June 14 – thanked those who have helped his daughter along the way.

Paige Winter said she has a long way to go but appreciates the love and support she received from family, friends and even people who don't know her.

"It fuels me, you know? It makes me more positive and upbeat and it moves me forward in my healing," she said.