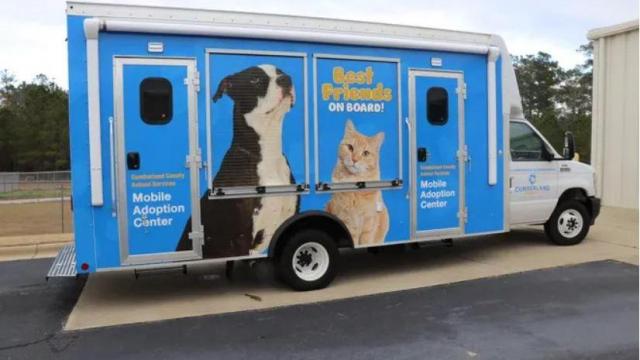 Fayetteville, N.C. — Cumberland County Animal Services has a new mobile adoption van designed to help cats and dogs get out of the shelter and find homes.

The Fayetteville Observer reports the department received a custom van designed by the manufacturing company Summit Bodyworks. The vehicle can house up to 21 dogs or cats, depending on their size, to off-site adoption events where potential adopters can walk through the mobile center and see the available animals. In most cases, the pets will be able to go to their new home the same day.

The van was funded through a grant program from the Stanton Foundation, which supports municipal shelters nationwide in their efforts to adopt more dogs. The van features a colorful exterior graphics package designed by County staff to help promote pet adoption and the County’s Animal Shelter.

The van will also assist during special circumstances, such as disaster evacuations, large animal cruelty cases and in partnering with other agencies in transporting animals to rescues in other areas to free up shelter space.

During COVID-19, the Cumberland County Animal Shelter, located at 4704 Corporation Drive, is accepting in-person adoptions by appointment only. You can view a gallery of adoptable animals online or call 910-321-6852 to make an appointment.

In 2019, WRAL learned that a total of 3,241 dogs and cats were euthanized at the Fayetteville shelter because there is simply not enough room to hold all stray animals. Many other counties in North Carolina have the same problem.

According to Smith, the Cumberland County shelter takes in more animals than almost any other North Carolina shelter – around 11,000 animals each year. It can only hold 300 animals at a time. Even with the help of fosters, volunteers and rescue groups, there is not enough space to house all stray animals.

"What people don’t understand is we literally have no choice," Smith said. "I don’t have a choice when I have 20 dogs coming in and I have no empty cages or kennels. I have to make space. If that means out of the 20, I can adopt out 10, fantastic. If I can get five to rescue, great. Maybe two go back to their owners. That still leaves me three dogs we might have to euthanize."

In crisis: More than 10,000 dogs and cats were killed in NC animal shelters last year

The decision to euthanize a dog or cat is heartbreaking for her staff, Smith said.

"People say, 'Just don't kill them,'" Smith said. "I would love that, but it's not an option for me. What we would end up doing is putting two or three animals in a kennel or putting crates in the hallways with an animal cramped in there – we’re not allowed to do that by law. Others say, 'Just turn them loose.' But we can’t just turn an animal loose to suffer a fate – it could starve to death or get hit by a car. So the only thing we can do that is at least painless for the animal is euthanasia."

Smith hopes with volunteers, adoption and resources like the mobile adoption center, more animals can be saved in the years to come.