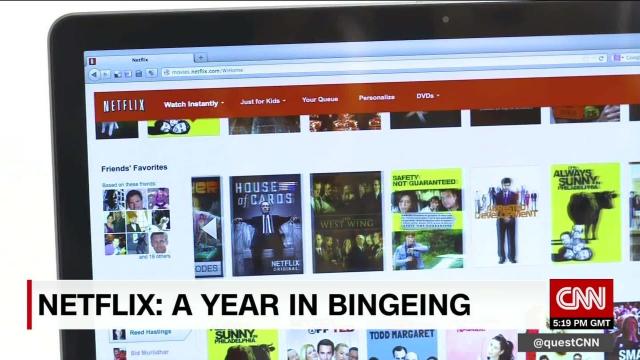 Shares of the streaming titan soared 55% in 2017 and have already shot up another 7% in the first two trading days of 2018 to an all-time high. Netflix is now worth nearly $90 billion.

And the party may be just getting started. Investors should be able to just Netflix and chill for the foreseeable future. And by that, I mean sit back and relax. Not that other slang definition for "Netflix and chill" that's a little bit more, uhh, salacious.

Despite current competition from Amazon and Hulu and the looming threat of more streaming options from Apple and the proposed combination of Disney and the movie studios of Twenty-First Century Fox, investors don't seem worried.

Macquarie Research analyst Tim Nollen wrote in a report earlier this week that Netflix is still comfortably in front of all its peers in streaming thanks to tens of billions of dollars invested on content.

"Netflix is miles ahead in terms of programming hours, original content, quality and time spent, and we don't expect this to change. Netflix has won," Nollen wrote.

The popular content includes original programming hits like "Stranger Things," "The Crown" and "Orange is the New Black" as well as licensed shows such as "Daredevil," "Jessica Jones," "Luke Cage" and others based on Marvel-Disney characters.

Nollen added that the upcoming Disney streaming service, which is not expected to launch until another two years from now, won't hurt Netflix either. Disney will be able to take its Marvel movies with it, but the TV shows would stay with Netflix.

That's one reason why Nollen thinks U.S. subscribers should remain loyal to Netflix. He added that the company is also "establishing passion brand status in many international markets."

Nollen also thinks that Netflix has been making some savvy deals with telecom and cable companies to get Netflix content in front of even more viewers.

Not everyone is willing to cut the cable cord just yet. And that's why Netflix has inked recent distribution partnerships with French telecom giant Orange, T-Mobile and Israel's Partner Communications to offer Netflix content to their subscribers.

Still, some investors aren't giving up hope that Netflix could wind up cashing in further by selling the company to an even larger rival.

To that end, analysts at Citigroup recently put out a report suggesting that Apple could use some of the $250 billion in cash it currently has sitting overseas -- and that may soon come back to the U.S. thanks to new tax laws -- to buy Netflix.

Investors probably shouldn't hold their breath for a deal though. As long as Netflix continues to rack up more and more subscribers around the world, it seems unlikely that it will need a deeper-pocketed parent to help it expand even further.