Netanyahu should be charged with bribery and fraud, Israeli police say

Jerusalem — The Israeli police were poised to recommend on Tuesday that Prime Minister Benjamin Netanyahu be charged with bribery, fraud and breach of trust, casting a dark pall over the future of a tenacious leader who has become almost synonymous with his country, according to the Israeli media. The announcement instantly raised doubts about his ability to cling to power.

Concluding a yearlong investigation, the police are prepared to offer a damning summary of their findings in two corruption cases: a gifts-for-favors affair known as Case 1000, and a second scandal, dubbed Case 2000, in which Netanyahu is suspected of back-room dealings with Arnon Mozes, publisher of the popular daily Yediot Aharonot, to ensure more favorable coverage.

Netanyahu corruption probes: What you need to know

Netanyahu, addressing the nation live on television even before the police released their findings, made clear he would not step down. “I feel a deep obligation to continue to lead Israel in a way that will ensure our future,” he said, before embarking on a 12-minute defense of his conduct.

But it is the favors Netanyahu may have given his wealthy friends in return that could herald his downfall. A formal bribery charge would be by far the most serious outcome, and the most ominous for his political survival.

Netanyahu is serving his third consecutive term since his election in 2009, and his fourth overall since the 1990s. If he remained in the post through July 2019, he would set a record for total time in office, surpassing that of the state’s founder, David Ben-Gurion.

Netanyahu has vehemently denied any wrongdoing and has vowed to fight on, saying that no police recommendation would prompt his resignation.

The Israeli law enforcement authorities have handled the cases with great caution, wary of the possibility of bringing down a prime minister who might then be proved not guilty in court, not least with Israel facing increasing security threats on its northern and southern frontiers.

But Israel’s constant state of alert has led some critics to argue all the more that a prime minister so focused on fighting his own legal battles cannot be entrusted with fateful decisions of peace and war.

Netanyahu long ago earned the nickname “the Magician” for his uncanny knack for political endurance, and even his most ardent opponents have been hesitant to write him off. 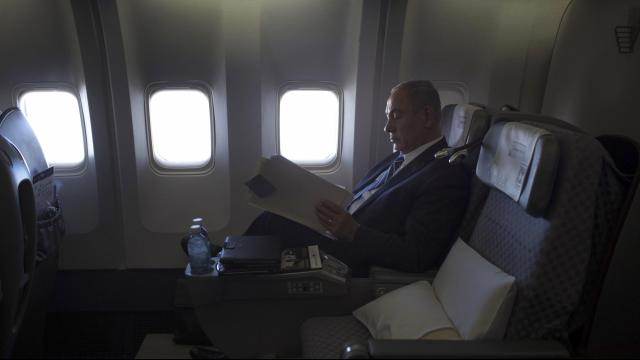 The police findings must now be examined by state prosecutors and the attorney general, Avichai Mandelblit. The final decision about whether to file formal charges lies with Mandelblit and is subject to a hearing beforehand with Netanyahu’s lawyers. Reaching that threshold alone could easily take months.

At what point Netanyahu might be legally required to step down, short of a final conviction, is likely to be a matter of increasingly heated debate, though public opinion and political pressure could in the end play a decisive role.

Israel’s Supreme Court has ruled in the past that government ministers or deputy ministers, once indicted, may not remain in their posts. Whether that principle should also apply to the elected prime minister is an open question.

Netanyahu would be something of a test case as Israel’s first sitting prime minister to be formally charged.

His predecessor, Ehud Olmert, announced his resignation in September 2008, a week after police recommended he be charged with bribery, breach of trust, money laundering and fraudulent receipt of goods. That case involved an American businessman and a travel-expense scandal from Olmert’s days as mayor of Jerusalem and minister of industry and trade.

Olmert was eventually convicted in various cases and served 19 months of a 27-month prison sentence. He was released last year.

Pre-empting the police recommendations, Netanyahu told the public to expect them and did his best to minimize their importance.

Experts have disputed those figures, however, and the prime minister’s opponents have begun quoting from an interview he gave in 2008, at the height of Olmert’s legal troubles, to turn the tables on Netanyahu.

Describing Olmert as “up to his neck in investigations,” Netanyahu said of his political rival at the time: “He does not have a public or moral mandate to determine such fateful matters for the state of Israel when there is the fear, and I have to say it is real and not without basis, that he will make decisions based on his personal interest in political survival and not based on the national interest.”

In some ways, though, Netanyahu has been here before.

During his first term in office, in the late 1990s, the police recommended that he be charged with fraud and breach of trust in a complicated case in which Netanyahu was suspected of acting to appoint an attorney general who would be sympathetic to a minister under investigation for corruption, in return for that minister’s political support. Ultimately, the attorney general closed that case, citing a lack of evidence.

Again, in March 2000, once Netanyahu was out of office, the police recommended that he be charged with bribery, fraud and breach of trust in a case involving his holding on to $100,000 in gifts that were state property and having the state pay for private work on his home. Months later, the attorney general also ordered that case closed.

This time around, the police recruited a state’s witness, Ari Harow, Netanyahu’s former chief of staff and once one of his closest confidants.

The police have also been making headway in other criminal investigations in which Netanyahu has not been named as a subject, but that involve associates from his most inner circle.

One scandal, called Case 3000, involves a $2 billion deal for the purchase of submarines and missile ships from a German supplier. Critics have described that episode as potentially the biggest corruption case in Israeli history, touching on deep conflicts of interest and national security.

Among those caught up in the shipping investigation are David Shimron, Netanyahu’s personal lawyer and second cousin, and Yitzhak Molcho, Netanyahu’s lifelong friend and close adviser, whom he has sent on his most delicate diplomatic missions since the 1990s. Molcho and Shimron are partners in a law firm as well as brothers-in-law.

Another possible case may be brewing over suspicions of the exchange of benefits in return for favorable media coverage between Netanyahu and a close friend who owns Bezeq, Israel’s telecommunications giant.