Neptune's moons perform a strange orbit dance around each other 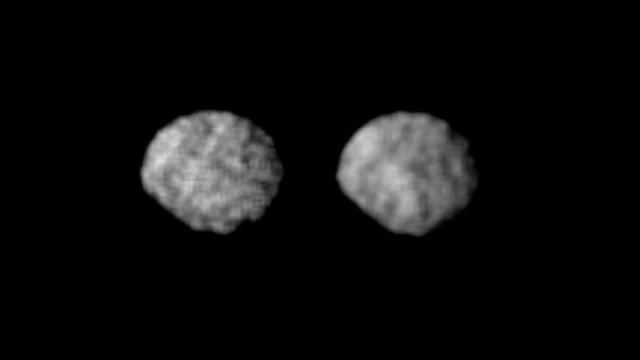 CNN — Two of Neptune's innermost moons perform a strange dance to avoid each other that is weird and completely unique compared to all known orbits, according to new research.

Naiad and Thalassa, both tiny Tic Tac-shaped moons around Neptune, are only about 1,150 miles apart. While Naiad completes an orbit around Neptune every seven hours, Thalassa takes about seven and a half hours. This makes Thalassa the slower moving partner in an oddly choreographed dance that actually keeps their orbits stable.

Naiad is in a tilted, varying orbit that resembles an oddly zigzagging pattern, where it appears to pass Thalassa two times above and below. Compared to Thalassa's slow, steady loop, Naiad appears to be flying by and gaining four laps with its up, up and down, down pattern.

A study of these orbits published recently in the journal Icarus. The observations of the orbital patterns were made using NASA's Hubble Space Telescope.

"We refer to this repeating pattern as a resonance," said Marina Brozović, study author and expert in solar system dynamics at NASA's Jet Propulsion Laboratory. "There are many different types of 'dances' that planets, moons and asteroids can follow, but this one has never been seen before."

Neptune is a gas giant distant from the sun in the outer solar system and it has 14 moons. Some of the moons formed in place along with Neptune while others were captured by the planet's gravity. Since the discovery of the small inner moons, scientists have believed that they are younger than Neptune and that they formed after Neptune captured its largest moon, Triton. They also thought these inner moons were fragmented due to impacts by comets.

The seven inner moons, including Naiad and Thalassa that are each 60 miles long, are also interspersed with Neptune's ring system.

"We suspect that Naiad was kicked into its tilted orbit by an earlier interaction with one of Neptune's other inner moons," Brozović said. "Only later, after its orbital tilt was established, could Naiad settle into this unusual resonance with Thalassa."

Earlier this year, Mark Showalter, a planetary astronomer at the SETI Institute, uncovered the 14th moon around Neptune called Hippocamp. It was hidden from view during Voyager's initial observation of Neptune and its moons.

"We are always excited to find these co-dependencies between moons," said Showalter, who is also a co-author on the new paper. "Naiad and Thalassa have probably been locked together in this configuration for a very long time, because it makes their orbits more stable. They maintain the peace by never getting too close."