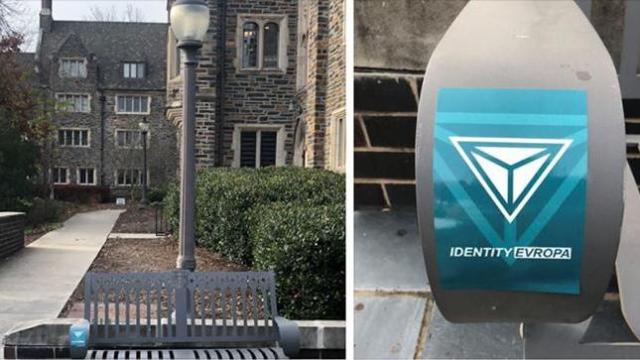 Durham, N.C. — The most recent round of Nazi vandalism on Duke University campus was spotted Friday by a student who shared it on Facebook.

"I wanted to inform the community that posters from the neo-Nazi group Identity Evropa were placed around West Campus either late last night or this morning," the person wrote. "Please be on the lookout for individuals distributing these materials and stay safe."

Keith Lawrence, Duke University spokesman, confirmed that three such stickers were found. He said Duke police were investigating where they came from.

Duke has seen at least three incidents so far this semester in which pro-Nazi messages were left on campus.

At the beginning of the week, a swastika was painted over a mural to honor the victims of the Pittsburgh synagogue shooting on the university’s "graffiti bridge" on East campus.

'OK to be white' fliers show up at NCSU, Duke

On Nov. 1, fliers bearing the phrase "It's okay to be white" were found at both Duke and North Carolina State. A pumpkin with a swastika carved into it also was found near Duke's Gilbert-Addoms dormitory.

A swastika was carved into a bathroom stall back in August.

No source has been identified for any of the messages, nor has anyone been charged or arrested.