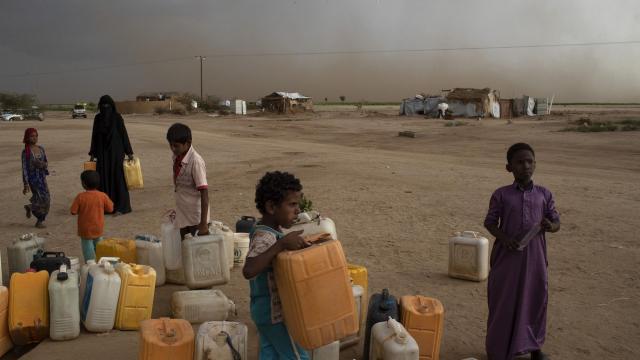 GENEVA — Nearly 132 million people will need aid and protection in 2019, the United Nations said Tuesday, opening an appeal for about $25 billion as more and more people are displaced by conflicts and protracted conflicts absorb most of the assistance.

Mark Lowcock, U.N. aid coordinator, said that 1 out of every 70 people on Earth will need assistance next year in seeking an increase in donations of about 10 percent, even though relief agencies are becoming more efficient.

“We need to make it a bigger priority in 2019 to address the underlying causes of crises — insecurity, conflict, poverty, development failures, inadequate adaptation and resilience to climate change,” he said.

The biggest challenge in 2019 will be the 3-year old conflict in Yemen, which has driven millions toward famine and has given the country the status of the world’s worst humanitarian crisis. Next year, nearly 24 million people — three-quarters of the population — will need some form of assistance, Lowcock said.

The number of people in Yemen receiving food aid from the U.N. each month climbed from 3 million people in 2017 to 8 million this year and will rise to 12 million in the coming year, he added.

The U.N. cited estimates that 57,000 people had died since the conflict started and close to 4 million people had been forced from their homes, including 600,000 people who fled Hodeida, which is home to Yemen’s biggest port and the target of an offensive by Saudi-backed forces.

But the $4 billion in relief the U.N. hopes to deliver in 2019 to stave off a catastrophic famine is a fraction of what is needed to enable the government to resume core functions, including paying teachers and civil servants. Such support would need to continue for years to prevent the country from falling back into crisis, Lowcock said.

With Yemen’s warring parties expected to open peace talks this week, the negotiations and external support could take the edge off extreme suffering in the second half of the year but that included “a lot of supposes,” Lowcock said.

The U.N. aid appeal was “based on what we think the situation will actually be, rather than wishful thinking about what we would all like it to be,” he said.

Yemen was the most extreme example of a significant rise in hunger. Between 2015 and 2017, the number of people facing a food crisis rose by more than half, to 124 million in 51 countries, the U.N. reported.

The changing climate means that hunger is likely to remain a major concern in 2019, when an El Niño event, the Pacific climate cycle that typically amplifies heat and is usually associated with record-breaking temperatures, is expected, Lowcock noted. An assessment by the U.N. found that 25 countries were at high risk of drought, tropical cyclones and floods.

The bigger cause of hunger remained conflict and insecurity, which displaced close to 69 million people in 2017 and drove up levels of poverty, malnutrition and disease, while hampering deliveries of humanitarian aid.

In South Sudan, where the situation is among the most dire, five years of civil war had left 5 million people, or half the population, in need of food aid heading into 2019, the U.N. said.

The horrific ethnic violence in South Sudan, which is estimated to have cost more than 380,000 lives and devastated its fragile economy, underscores another worrying trend: increasingly protracted crises that monopolize ever higher shares of available aid.

In the past five years, Sudan, South Sudan, Syria and Somalia have absorbed more than half of all international humanitarian aid, the U.N. reported. Three years ago, conflicts that had lasted more than five years accounted for less than half the available aid; last year, they took more than 80 percent. The trend is deeply worrying, James Munn, Geneva director of the Norwegian Refugee Council, said in a statement. “Humanitarian assistance will never become anything but a Band-Aid solution,” he warned, adding that the victims of conflicts need warring parties and countries with influence over them to find political solutions.