More than 18,000 Democrats turn out for first day of early voting in Nevada 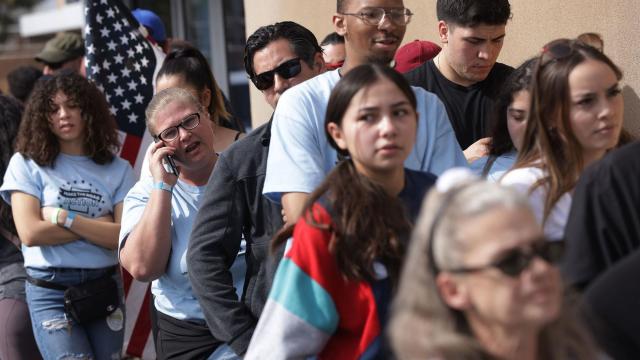 CNN — Nevada's Democratic Party leadership is hoping a strong early turnout for its caucuses signals a successful showing this weekend.

Speaking on Sunday to CNN's Fredricka Whitfield, Nevada state Democratic Party Chairman William McCurdy didn't address the wait times, but stated he was pleased by the enthusiasm and expects it to continue until early voting ends.

"I am really excited that Nevada Democrats really showed up on the first day, our historic first day of early vote. We're anticipating folks to continue to engage in this process from now until the 18th, when early vote ends and we're looking forward to, you know, a significant turnout on caucus day as well," McCurdy said.

He added that the party has been working "around the clock" to make sure the caucuses there don't run into some of the same problems that happened in Iowa.

The Nevada State Democratic Party tweeted that more than 18,500 state Democrats participated in early voting Saturday. But wait times of more than three hours and a lack of volunteers at at least one precinct had some voters worried about the state's caucuses on February 22.

Debbie Curtis, a teacher in the state, told CNN Saturday she saw people walk away after waiting for an extended period of time at the Palo Verde High School in Las Vegas.

"Hopefully they go someplace else to vote," she said. "It's just too important."

The party, she contended, needs to realize "that this is huge and if they don't do something that we could have another four years of Trump which ought to be frightening."

CNN previously reported that caucus workers and presidential campaigns are worried about the lack of detail the state party is providing about how the results reporting process will work.

The state party will use a "caucus calculator," as outlined in a memo released Thursday. Described as "user friendly," the calculator will be used to add early voting data into each precinct and calculate totals on caucus day, February 22, along with paper work sheets.

On Saturday, there were 63 early caucus sites open statewide and on Sunday there were 24. By Monday, it will be down to 19, according to the state party.

This story has been updated to reflect the Nevada Democratic Party's adjusted voter totals.