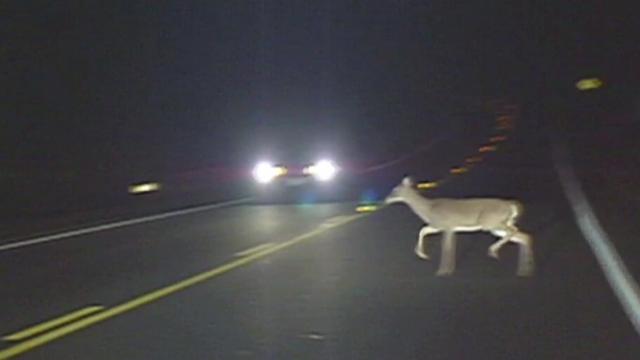 Raleigh, N.C. — The North Carolina Department of Transportation is warning drivers to watch for deer on the road this fall, when chances of a crash with a deer increase.

Between 2011 and 2013, nearly half of the more than 61,000 animal-related accidents in North Carolina took place from October to December. About 90 percent of those involved deer, according to state officials.

“Drivers need to be careful on the roads all the time, but even more so over the next few months,” NCDOT Director of Mobility and Safety Kevin Lacy said in a statement. “Increased deer activity and decreasing daylight hours mean vigilance by motorists needs to increase for their own safety and the safety of others.”

According to a NCDOT study, within the past three years, animal-related crashes have killed 18, injured more than 3,400 drivers and passengers, and caused more than $149 million in damage.

For the 11th year in a row, Wake County led all counties in the number of animal-related crashes with 1,135. Officials attribute the high number to a combination of decreasing amount of woods in the county and the increasing number of drivers and roads.

Deer are on roadways more during the fall into winter months because of hunting and mating season. They travel the most at dawn and during evening. Most crashes occur from 5 a.m. to 8 a.m. and 6.pm. to 10 p.m.