Shamori Brown and Tavis Rhodes were killed in the shooting at a parking lot between Dupree and Lawson Street just after 9 p.m. A black Nissan Altima is at the center of the search for suspects, as security footage captured the car driving away from the scene seconds after shots were fired.

Durham Police Major Walter Tate Jr. reiterated that the shooting did not appear to be random. Durham Police Department is leading the investigation.

Although the men were not N.C. Central students, university Chancellor Johnson Akinleye extended condolences to families of people who died.

"This press conference is a call to action," Akinleye said. "We are pleading with our city, our county and state officials to commit to devoting more resources and attention to combating the issues of crime in Durham."

Both Brown and Rhodes were Hillside High School graduates.

The situation was complicated on Monday afternoon at nearby Dupree Street, as another shooting took place around 1:30.

Monday night, city council leaders addressed what needs to be done to create a safer community. Leaders talked for nearly 45 minutes about the gun violence problem in town.

"These are events that are unacceptable in our city," Durham Mayor Steve Schewel said. "This gun violence that is ravaging our city must stop and we must do everything we can to stop it."

Durham City Councilman Pierce Freelon explained how he is pitching a strategy on working with young black men.

"[We're] working on a strategy for black boys, Freelon said. "It’s been slow-moving because it’s a collaboration with the county and our local collaboration can take time. It’s been frustrating on days like today when families are grieving and people want answers."

At the press conference at N.C. Central, the chancellor pointed to the funding, more than $3 million, that's gone into providing additional security measures in recent years to show that the university is committed to providing a safe place for students and faculty. Akinleye mentioned hopes to acquire more technology like ShotSpotter, a gunshot locator system.

"I want to assure everyone that the NCCU community and the public at large that our campus is safe and remains a safe and healthy environment," Akinleye said. "We will not live in fear or have our health or wellbeing at risk due to violence and crime around our community."

On Sunday, WRAL News spoke with Rhodes' mother, who asked not to be identified over safety concerns.

"I'm still trying to wrap my mind around this. I will never see my son again," she said. Rhodes graduated from Hillside High School in 2019, served in the Army Reserves and left behind a 3-month-old son.

The shooting happened while a football game was going on at nearby O'Kelly-Riddick Stadium and authorities placed fans inside the stadium on brief lockdown as a precaution.

Another shooting on Monday afternoon took place on Dupree Street, across the street from the Communications building.

Michael Askins, 43, of Durham, was found dead inside a home. Investigators said the shooting wasn't random. 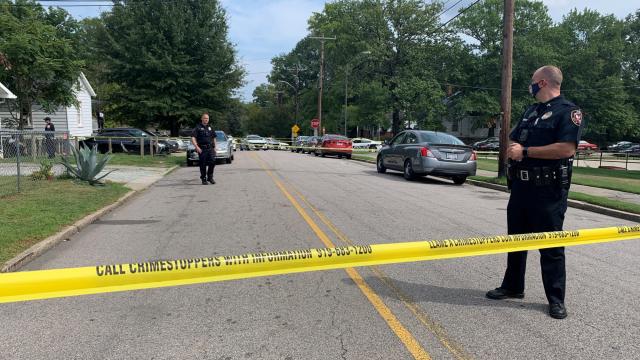 "Durham is a vibrant community and the safety of its citizens should be its upmost priority," Akinleye said.