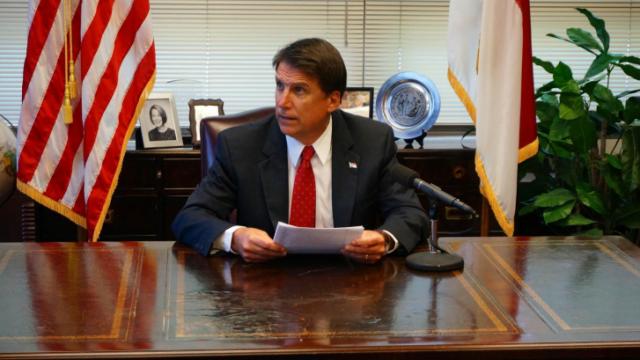 By Matthew Burns and Cullen Browder

Raleigh, N.C. — Gov. Pat McCrory on Tuesday blasted the North Carolina Association of Educators, saying statements made by the teachers organization in recent weeks has led to confusion over teacher pay raises included in the state budget.

"I think the NCAE is misrepresenting the facts," McCrory said at a news conference when asked about longevity pay for veteran teachers.

"I guarantee that, had others proposed this type of increase, the NCAE would be cheering," he said. "It was probably the wrong party that recommended it."

Lawmakers and educators went back and forth in recent weeks over the size of raises in the budget. Republican legislative leaders said the raises averaged about 7 percent and were the largest in state history. The NCAE and others argued that those claims were inflated, saying longevity pay – annual bonuses given to teachers with at least 10 years of experience – was rolled into the raises.

McCrory, who has said he plans to sign the $21.1 billion budget, parsed the difference last week by referring to it as a 5.5 percent average raise plus longevity pay.

"The longevity pay money is still clearly in place, and I think there's misrepresentation coming out of the NCAE, which is confusing teachers," he said, adding that he's spoken to a number of teachers who are pleased with the raises.

"It isn't the perfect solution, but I think it's a combination of reform and rewarding our teachers," he said.

Mark Jewell, an NCAE vice president, said that, no matter who is in power, the group believes the pay increase doesn't reward veteran teachers and won't be sustainable in future years, based on current state revenue projections.

The governor said critics of the budget should present their own spending plan, complete with how they plan to pay for their priorities, instead of complaining about it.