Asheboro, N.C. — The North Carolina Zoo is working with two other agencies to rehabilitate a pair of orphaned otters and reintroduce them to the wild.

According to zoo officials, the two North American river otter pups were orphaned after their mother was hit by a car. The pups were picked up on April 23 near Engelhard, North Carolina, after a concerned caller contacted the N.C. Wildlife Resources Commission (NCWRC).

The pups, currently six weeks old, are in the care of the Asheboro zoo’s Valerie H. Schindler Wildlife Rehab Center, where they will be treated and evaluated for several months. Officials said the pups were rescued with limited human contact, which increases their chance of surviving in the wild one day.

In the next few months, the otters will transition from formula to solid food and learn to catch fish on their own. Their final stages of care will be in a safe, outdoor, aquatic enclosure where they can prepare for their return to the wild.

“We are caring for them as hands-off as possible," said Dr. Jb Minter, the zoo’s chief veterinarian. "We want to be respectful of their wild nature, ensuring natural behaviors are maintained for a successful release." 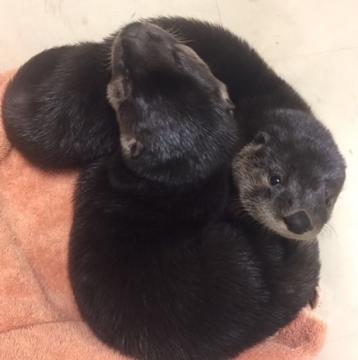 Once the pups are ready to live in the wild, the zoo will work with the NCWRC and the North Carolina Aquarium on Roanoke Island to guarantee a successful release.

Zoo officials expect the pups to be on their own by late summer or early fall.