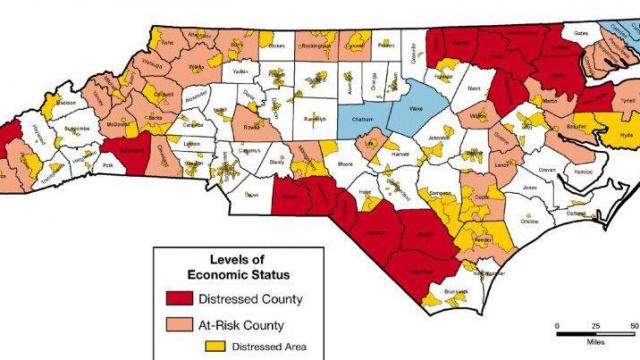 Raleigh, N.C. — Lawmakers saw stark evidence Thursday that decades of efforts to spur economic growth in rural areas have been thwarted by trends that have sent population and job opportunities to the state's biggest cities.

"A lot of the higher-paying jobs are concentrating in core urban areas," said Ted Abernathy, an economic development consultant who walked the ​Joint Legislative Economic Development and Global Engagement Oversight Committee through statistical measures that showed which areas of the state are growing and which are falling behind.

Abernathy cautioned against interpreting the results too broadly, noting that there are fast-growing urban areas of the state that still have poverty pockets.

That said, he pointed to a chart that showed only five of North Carolina's 100 counties – Wake, Durham, Orange, Forsyth and Mecklenburg, all of which are urban areas – have average incomes above the state average. 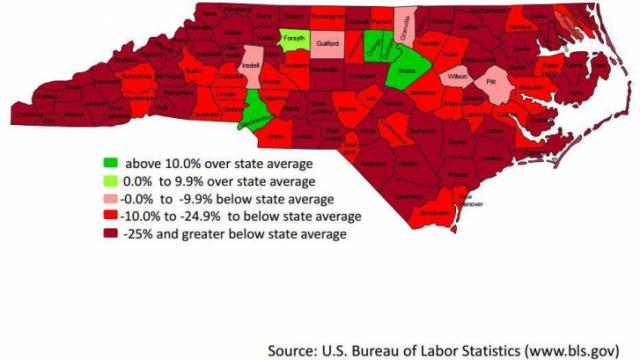 Sen. Floyd McKissick, D-Durham, asked how the trend of talent and jobs moving away from rural areas could be reversed.

Abernathy said rural areas need to find out what they have that is unique, but they are unlikely to be able to compete "head-on" with large metro areas that have access to airports and major highway systems.

Gov. Pat McCrory mentioned this same idea during the North Carolina Chamber's Annual Economic Forecast Forum on Wednesday when he said that smaller communities need to be "linked" to bigger cities.

"I don't think you're going to change the general urbanization as a global trend," Abernathy said.

One potential response from lawmakers and the administration is a rewrite of how the state channels help to economically distressed areas.

Currently, North Carolina is cleaved into a system of tiers, with the wealthiest counties theoretically getting less help and the most distressed areas getting more.

But both legislative reviewers and McCrory's Commerce Department have concluded that tier system no longer works. One major reason is that it was designed to help parcel out funding from economic development programs, which have gone by the wayside. But the tiers are still used to help funnel infrastructure funding and other programs.

Few other states use their own version of the tier system to channel anything other than economic development funds, said Sara Nienow, who works for the General Assembly's Program Evaluation Division. Her report recommends ending the tier system and replacing it with new criteria.

That's something the Department of Commerce is already working on, said Jeff DeBellis, who works with the Commerce Department's Labor and Economic Analysis Division.

"We agree the tier system should be replaced," DeBellis said.

In its stead, he said, Commerce officials would like to see an index that ranks each county and would give policymakers the flexibility to tailor resources based on more specific kinds of needs.

Toward the end of his presentation, DeBellis got a question from Rep. Mark Brody, R-Union, about how the Commerce Department plans to measure economic distress.

DeBellis said it was shorthand for a low-paying job.

"We think that high-paying jobs, or at least average-paying jobs, help to improve the economic situation of a community," he replied.

This answer didn't sit will with Brody.

"I guess I would really ask you to weigh that term," Brody said. "The reality is that having the ability to work is a blessing from God, and I guess he doesn't consider certain jobs low quality. I'd really ask you to use a different term."

DeBellis did not reply, and Rep. Susan Martin, R-Wilson, who chairs the committee, then moved the meeting on to the next topic.