NC Trooper Daniel Harrell: 'He was born into the Highway Patrol family'

North Carolina Highway Patrol Trooper Daniel Harrell was shot in the face and rushed for medical treatment to Vidant Medical Center in Greenville, where he was listed in stable condition, Col. Glenn McNeill, commander of the State Highway Patrol, told WRAL News on Tuesday.

"It's going to be a while before he makes a full recovery," McNeill said while standing outside the hospital. "The family would like to thank everyone for their prayers and the support they've been shown during this horrific ordeal."

McNeill declined to divulge details of the trooper's injuries, saying only that, "We hope he will make a full recovery."

Harrell's father and grandfather were also law enforcement officers, authorities have said. The younger Harrell has been on the force for five years.

"He was born into the Highway Patrol family," McNeill said. "What took place the other night will demonstrate and show that our trooper is a hero (who) when faced with difficult odds, he relied on his training and did a phenomenal job working through what was a horrible incident."

McNeill said he also spoke to Harrell's wife who, he says, is doing as well as can be expected.

"She is shaken to the core, but she has a strong resolve to be there beside him and see him through a full recovery, and to see him back in uniform doing what he loves to do," McNeill said.

Three men are facing charges in connection with the incident, which occurred at 5:15 p.m. when Harrell tried to pull a vehicle over on Haynes Road, southeast of Elm City.

John David Jones, 36, was arrested late Monday and charged with assault with a deadly weapon with intent to kill inflicting serious injury and assault on a law enforcement officer. He was the subject of a massive hours-long manhunt Monday night, authorities said. After being taken into custody, Jones was transported to Wilson Medical Center for treatment of minor injuries.

Jones was being held on a bond of over $1 million after he appeared in court for a preliminary hearing Tuesday morning.

William Allen Boswell, 40, of Elm City and Bryan Jeffrey Mullins, 25, of Bailey, are charged with possession of a stolen motor vehicle. They are currently in the Wilson County Detention Center under a $15,000 secure bond. 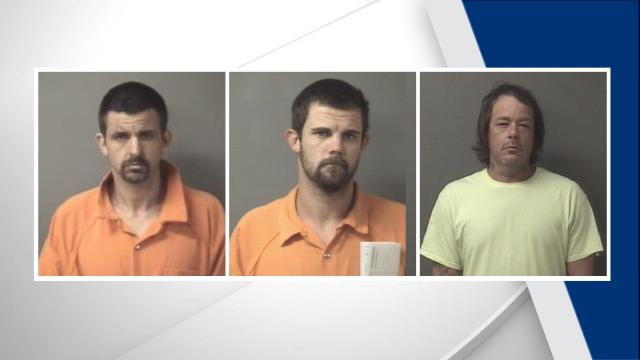 McNeill also declined to reveal many details about the incident, saying it was still under investigation.

"I wouldn't be able to comment beyond that," McNeill said.

"He has an outstanding Highway Patrol family that is going to be behind him to support him every step of the way," McNeill said, adding that the trooper did not want to go to the hospital after being shot.

"He wanted to stay in the fight," McNeill said.