Durham, N.C. — Last June, a student team from the North Carolina School of Science and Math was among five national winners of the annual "Samsung Solving Problems for Tomorrow" competition.

Solving problems using their STEM (science, technology, engineering and math) experience is their passion. It was last January when their team was among three in the state and 200 across the country still hoping to be among the top 5 teams that would each earn a prize worth $100,000. 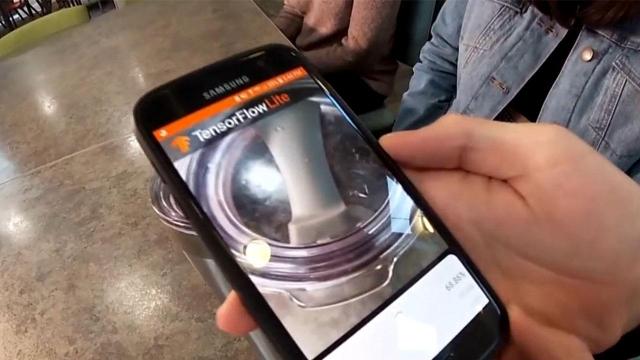 Holding an average thermos with a metal container and plastic lid, Li explained how the app works. The phone’s video function scans the metal surface. "It will classify as metal with about an 80% accuracy," he said.

There were three North Carolina student teams who made it to the second stage of Samsung’s challenge, including students at Sallie B. Howard School in Wilson. Their project was an electronic device used as an early warning system for children or adults suffering a hypoxic episode like drowning or an asthma attack.

The Howard school team won $15,000 worth of Samsung classroom technology for their efforts but did not advance to the final 200-team stage.

The NCSSM team’s app did advance to the finals. Rather than the planned winners announcement event in New York City, the pandemic forced Samsung organizers to adapt. "It ended up the announcement was virtual so we were all in different places," explained NCSSM teacher Letitia Hubbard.

She says students and the entire school watched the virtual event from their homes as their team received news of their award.

Just as Samsung had to adapt to the new Covid-19 reality, so did NCSSM administrators as the school’s fall semester approached.

Their STEM students typically live on campus and collaborate at all hours with their classmates, teachers and staff. Rather than sending all students home for virtual learning, the administration designed their own hybrid learning model.

"We’re operating in a low-density format," explained Hubbard. "So half of our students are all on campus and half are at home (learning virtually from their home laptops)".

The half of students on campus during the fall semester follow social distancing, hand sanitizing and use of masks. Hubbard added, "The students are tested when they come on campus. The administration has been able to administer surveillance testing on campus."

In the second semester, the plan is to have the two student groups switch. The fall on-campus group would spend the winter/spring season at home with remote-learning and vice versa.

All students have the option to stay home with remote-learning according to their comfort level with infection risks.

The Samsung challenge is an annual event. Oct. 1 marked the start of schools choosing their projects and applying to be in the competition.