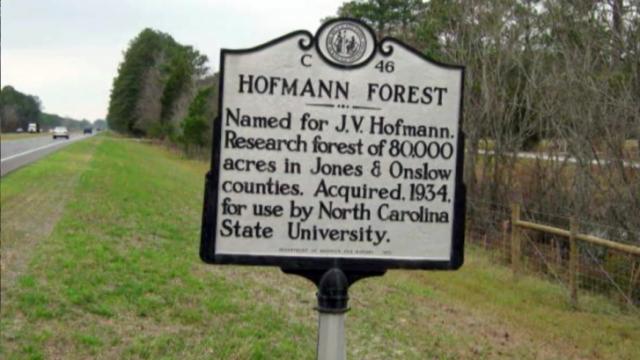 Raleigh, N.C. — Nineteen months after a deal to sell Hofmann Forest fell through, North Carolina State University officials have agreed to have an Alabama-based firm harvest timber from much of the 79,000-acre research forest near the coast while the university retains ownership of the land.

Resource Management Service was one of two firms that had planned to buy Hofmann Forest from the university for a combined $131 million, but the sale fell apart in December 2014 when the couldn't get their financing together.

"This new agreement ensures the sustainability of the timberland for the long term," N.C. State Chancellor Randy Woodson said in a statement. "It respects the needs of the military and is consistent with long-term economic development goals for eastern North Carolina. It’s a win for the university, the timber deed buyer and the community."

N.C. State will earn about $3 million a year from the deal to support the teaching, research and outreach programs in the College of Natural Resources, officials said. The steady income is more than double what Hofmann Forest had been generating for the university, and that lack of income is what prompted officials three years ago to first look at selling the forest.

The land in Hofmann Forest was bought in the 1930s for research and to provide income for N.C. State's forestry program.

Some N.C. State professors, foresters and environmentalists sued over the proposed sale, arguing that the state constitution mandates conserving public lands for public benefit. The case went to the state Supreme Court, but went undecided because the sale had fallen through by then.

By retaining ownership of the forest, N.C. State maintains access for students and faculty in the College of Natural Resources to teach and conduct research there. Officials also noted that much of the forest will remain undeveloped and can also be used for military training by nearby Camp Lejeune.