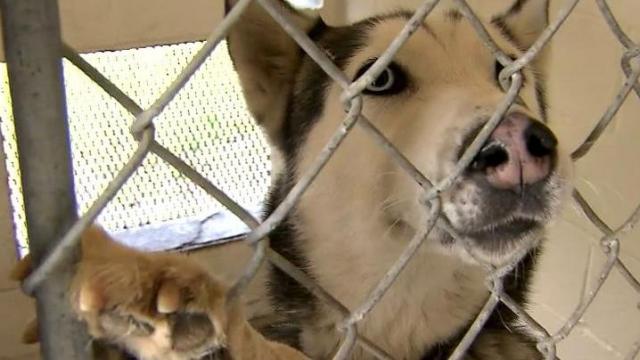 Troy, N.C. — For dogs and cats that end up at the Montgomery County Animal Shelter, the journey is like being sent to death row. The shelter, which has the highest kill rate in the state, euthanized nearly 1,200 animals – 100 percent of cats and 98 percent of dogs – brought there last year, according to state records.

“It's like going to your mother's funeral every time you do it. You never get over it,” said animal control officer Leon Everett, who euthanizes the animals by lethal injection.

North Carolina does not regulate euthanasia rates at county animal shelters. The state only began inspecting county shelters in 2006. Montgomery County’s animal shelter has failed 11 of its 14 inspections, according to public records the WRAL Investigates team examined.

Inspectors called the shelter’s conditions “deplorable” and noted that it did not have any walls to protect the animals from the weather, the dogs and cats weren’t being fed and cages weren't cleaned for an entire weekend.

The shelter abides by the 72-hour state minimum to hold animals before they are euthanized, but there's no formal adoption process, no regular shelter hours and no website to advertise available animals.

Montgomery County manager Matt Woodard said he isn’t surprised by his county’s high kill rate, which he attributes to funding problems and a different mentality about animals among people in his county. Less than 1 percent of the county's $29 million budget goes to the shelter. It receives about $95,000 a year, which pays for two full-time workers, trucks, fuel, power and equipment.

On the day the WRAL Investigates team visited, animal control officers found a Labrador mix dumped at the shelter with its legs wrapped in duct tape.

“There are cruel people in the world,” Woodard said.

Woodard has helped bring the shelter’s concrete and cages closer to state standards over the past year, but he would like to do more.

“Yes, we all would like to build a new facility to make it perfectly climate controlled, but we’re not able to do that,” he said.

Pushed by state inspectors, Montgomery County commissioners voted to spend $30,000 to put in a new septic system, a portable building for lethal injections, retractable windows and walls in the shelter. Before those changes, “the air in the winter would come through here and the animals would shiver,” Woodward said.

Lee Hunter, director of animal welfare with the N.C. Department of Agriculture, acknowledged that Montgomery County's shelter was "one of the worst" in the state. However, he chose not to shut it down.

"When shelters have gone so long without oversight, you can't turn around as soon as they come under and just say, 'We're shutting you down.' The animals have to go somewhere," Hunter said, noting that the shelter needs more financial help and public involvement.

While Montgomery County faces criticism for its high kill rate, other county shelters with much lower euthanization rates have come under intense scrutiny from animal rights groups. The Wake County animal shelter was the focus of public outrage last year when its euthanasia rate climbed above 40 percent.

“The shelter system in North Carolina is pretty much broken,” said Lisa Brockmeier, a blogger with the shelter pet advocacy group FixNC. She says Montgomery County’s money struggles are no excuse for a history of shoddy conditions and a high kill rate.

“My reaction is, they're not even trying,” she said.

Money can be a factor, but not always. Some of the poorest counties in the state have the highest kill rates. State records show Anson, Edgecombe, Surry and Washington are all above 90 percent. But other poor counties are making it work, such as Alleghany and Bladen, which have kill rates of 27 percent and 33 percent, respectively.

Tom Hicks is president of the Montgomery County Humane Society, which consists of a few dog runs in a volunteer's backyard. With limited space, they work with animal control on rescues. Those adoptions are not reflected in the state numbers.

Montgomery County cleared some land next to the shelter for a Humane Society adoption center. Volunteers have raised about $21,000 so far, but hope to raise more so they can build the center.

“We'd like to get it where at least the social animals have a chance of being adopted,” Hicks said.

Until then, the chances are high that most animals won't make it out alive.

“If I were a stray dog in Montgomery County, I would think, ‘Gosh, my chances of staying alive are better out here in the woods,’” Brockmeier said.

HOW YOU CAN HELP

Word of WRAL’s story has stirred up tremendous emotional reaction from the public. WRAL reached out to Montgomery County’s manager and offered to help promote an adoption clinic for the animals. Instead, Woodard asked that people who want to help should coordinate through the Montgomery County Humane Society, either by donating money or adopting animals.

To learn more about spay and neuter programs:
Contact Penny Page with the veterinary division of the N.C. Department of Agriculture
919-715-7111
www.ncspayneuter.com

To learn more about organizing and volunteer efforts:
Contact Kim Alboum with the Humane Society of the United States-North Carolina Chapter
kalboum@hsus.org