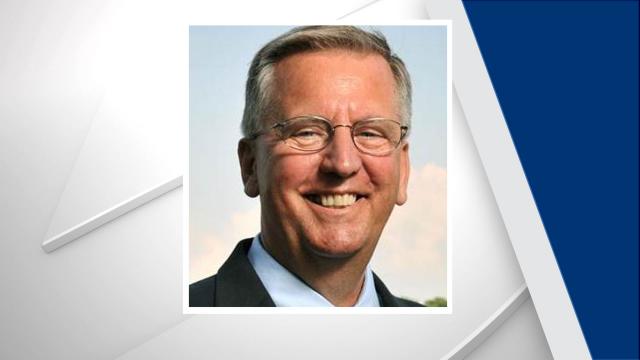 Raleigh, N.C. — A North Carolina senator suggested Tuesday that the president might suspend basic liberties to overturn an election that he believes, without evidence, was stolen.

Steinburg told WRAL News on Tuesday evening that he wasn't endorsing the idea, just "putting out there options that others say still remain on the table," though he later said he'd be on board with it. In an extended harangue, Steinburg also made it clear he believes the recent presidential election was stolen and that Trump is the victim of a conspiracy to which multiple countries, the media, U.S. government agencies, officials and judges are either a part or turning a blind eye.

Steinburg then offered, unprompted, to take a psychiatric evaluation. He said the CIA and FBI both know there's a coup d'etat going on in the country but won't do anything about it.

"They think we’re just bunch of boobs out here in the hinterland," he said. "Well, these boobs are waking up.” 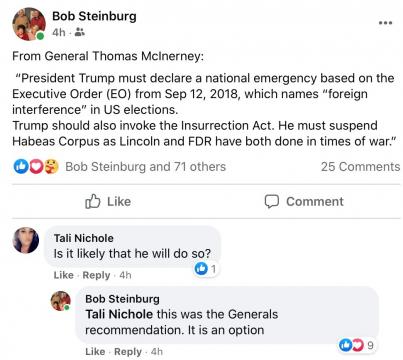 Steinburg offered no evidence for his claims, which are a rehash of conspiracy theories racing around the internet and conservative media in the wake of Trump's re-election loss.

Asked why so many courts, including the U.S. Supreme Court, rejected lawsuits intended to overturn President-elect Joe Biden's win in the November election, Steinburg said, "let’s take a look at Justice John Roberts."

He then suggested "somebody's got something" on the chief justice of the U.S. Supreme Court and, as evidence, said a lot of retired FBI and CIA agents live in his district and have told him so.

"I hear this all the time," Steinburg said. "All the time.”

Asked about his habeas corpus post, Steinburg said he was "merely quoting what the general said," but he also said it should be an option if the president feels there was foreign intervention in the election, as Steinburg himself certainly believes.

Chris Krebs, head of the U.S. Cybersecurity and Infrastructure Security Agency, said last month that there is no evidence of any foreign country changing vote tallies or preventing Americans from voting. The president then fired him.

Steinburg struggled to define habeas corpus in any way, replying to questions on the topic at one point with, "I'm not an attorney." Suspending habeas corpus would let authorities detain people indefinitely without bringing them before a judge.

That explained, Steinburg replied: “If that's what needs to be done, if there are people who have been identified as folks who are suspected of high crimes and misdemeanors, who are threatening the very security and foundation of our nation … for whatever period of time it takes to round them up, then yes.”

The Insurrection Act, also mentioned in Steinburg's post, allows the president to deploy the military on U.S. soil.

The post also notes that presidents Abraham Lincoln and Franklin Roosevelt suspended habeas corpus. Lincoln did so during the Civil War, Roosevelt during World War II. During WWII the U.S. government held Japanese-Americans in concentration camps.

Steinburg, 72, won re-election last month and will return to the state Senate next year for his second term. He served three terms previously in the state House. The Facebook post appeared on his personal Facebook page, but it would not be out of character on his official page, where he frequently posts conspiracy theories from conservative media outlets.

A spokesman for Senate President Pro Tem Phil Berger, the Republican leader in the state Senate, declined to comment Tuesday.