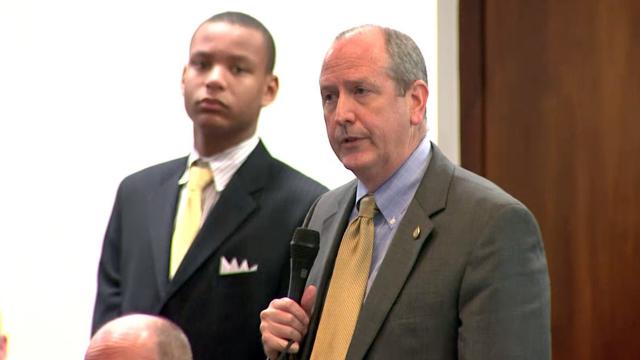 Raleigh, N.C. — The controversial social network Gab rose to national headlines in recent days after Robert Bowers used it to post anti-Semitic rants leading up to Saturday's attack on the Tree of Life Synagogue in Pittsburgh, killing 11 mostly elderly members during services.

Sen. Dan Bishop, R-Mecklenburg, was an early investor in the platform, which was created in 2016.

In a tweet on Aug. 17, 2017, Bishop announced, "So, I'm about done with SF [San Francisco] thought police tech giants, and so... I just invested in Gab," adding a link to the start-up's crowdfunding site.

In an early fundraising statement, Gab.com styled itself as a haven for speech censored on other sites: "We empower dissidents who have been silenced from other platforms." It has become a favored network for white supremacists, anti-Semites and other far-right fringe groups.

Days before his Gab investment, Bishop tweeted his opinion that the Black Lives Matter movement was no different than the white nationalists who had engaged in a violent confrontation in Charlottesville, Va.

Before he committed the Pittsburgh attack, Bowers posted about his intentions on his Gab profile, which includes the statement, "Jews are the children of satan."

Gab's site is currently down after its domain host pulled the plug in the wake of the attack.

Gab.com Chief Executive Andrew Torba has repeatedly denied any responsibility for Bowers' actions. Torba posted a message Monday, saying the company is searching for another hosting provider and pledging to continue to serve its users.

Bishop, who is seeking re-election, said in a tweet Wednesday that he put $500 into the crowdsource-funded startup because it was supposed to be an unbiased platform. But he doesn't support its use to spread racist rhetoric.

The link between Bishop and Gab was first reported by the Daily Mail UK.

The North Carolina Democratic Party called on Bishop to sell his small stake in Gab.

"No modern politician in North Carolina has done more to promote hate and discrimination than Dan Bishop. From funding a hate-speech fueled social media platform riddled with anti-Semitic and white nationalist content to legislating discrimination, Bishop continues to embarrass our state," Democratic Party Executive Director Kimberly Reynolds said in a statement. "Senator Bishop must disavow the hateful rhetoric promoted by Gab and divest from the platform immediately."

In 2016, Bishop was one of leading proponents of the North Carolina law known as House Bill 2, banning transgender people from using public restrooms and locker rooms that match their gender identity. Bishop insisted that women and children would be at risk of molestation or attack without such a ban in place, despite a lack of evidence to that effect.