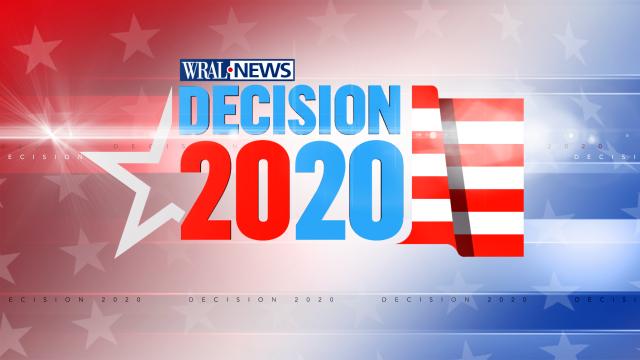 With a redrawn district and the retirement of Sen. Rick Horner, R-Nash, at the end of the current term, the District 11 race has attracted five major-party candidates, including three Republicans, making for the biggest field and the largest Republican primary in any state Senate race this year.

One of Nielsen’s primary opponents, state Rep. Lisa Stone Barnes, R-Nash, told Carolina Public Press this week that Nielsen has said she was not qualified to hold the office because she is a woman. Barnes currently represents portions of Nash and Franklin counties in House District 7.

“He said I wasn’t qualified to run because I was a woman,” she said. “I believe I am the most qualified of the candidates when you look at my experience and background.

“In 2020, I find that very, very surprising and disappointing that he would make that kind of statement, and then to learn that he has this domestic violence issue, too, is very concerning.”

For his part, speaking to CPP on Wednesday, Nielsen categorically denies he said anything sexist about Barnes.

“That’s absurd,” he said. “First of all, I don’t think anyone should print hearsay. If you heard something yourself, go ahead and print it. I think she’s a good candidate. In fact, if I don’t win, I think she should win.”

However, a reporter for The Wilson Times told CPP that Nielsen also refused to speak with a female reporter about the domestic violence allegations against him. The Wilson Times published an article about the issue, written by Lindell Kay, earlier this week.

Nielsen’s wife, Karen Nielsen, filed a request for a domestic violence order of protection on Jan. 13. In the 16-page document, she said Nielsen tracked her movements with electronic devices, bullied her disabled son and prevents her from working.

She wrote that, after he assaulted her and left multiple bruises, he took her keys and phone, “depriving me of the ability to leave unless (it was) with him.”

“He says if I refuse to go with him and call a ride … that he will call 911 and say I assaulted him,” she wrote.

Dennis Nielsen has at times stood in front of the car when she tried to leave and threatened to call 911 if she tried to drive past, putting his foot on the tire, Karen Nielsen wrote. At times, he has removed the license plates from vehicles to prevent her from driving them, she said.

When CPP asked Dennis Nielsen if he refused to allow her to drive one of their many cars, as her filing says, he laughed and then said, “First of all, that’s not domestic violence.”

Her filing also said he threatens to charge her with crimes unless she sleeps with him.

When reached by phone, Karen Nielsen, 52, told CPP that, at one point, she started sleeping in another bedroom.

“He then gave me a letter that said, until we were officially separated, my place was in the marital bed, and it wasn’t appropriate for his wife to be in another room,” she said late Wednesday.

She wrote to the court that the major issue is her husband’s “rigid personality and lack of empathy for anyone ‘different’ or not perfect and respectful at all times, even under stressful, high-conflict situations.”

At one point, her domestic violence filing said, he gave her eight pages on “How to be a submissive wife,” which included quotes from the Bible.

The week before she filed for a domestic violence order of protection, Karen Nielsen said her husband attended a political dinner. On that date, the Johnston County Republican Party held its January meeting.

Karen Nielsen said she refused to attend with him. When he returned, he told her she would have liked the event. He started telling her about all of the high-profile people who were there. “And then he started name-dropping judges,” she said.

The following Monday, she filed a request for a protective order, and after that, District Judge Jimmy Love Jr. heard her case. She said she felt scared because Love is one of the judges her husband told her that he met during that Republican Party function.

She said Love continued the case. The clerk’s office confirmed the next court date is Jan. 31. During this time, the protective order remains in place.

The candidate said he owns a gun store, a business that he said is now effectively sidelined because the protective order forbids him from having firearms.

Still, Karen Nielsen said she’s torn. She said he is not always a bad person.

In 1989, when Dennis Nielsen served in the Iowa National Guard, United Airlines Flight 232 crashed short of the runway in Sioux City in a pinwheel of flames. Debris was strewn for hundreds of feet, from a cornfield that absorbed the initial impact, past the end of the runway.

From the disaster, during which 112 of its 296 passengers died, an iconic image of heroism raced around the world: Nielsen cradling a distraught 4-year-old survivor as he carried the boy to safety.

“When he’s good, he’s good,” Karen Nielsen said. “He can make me feel like the smartest, most beautiful, the sexiest woman. He can put me on a pedestal so high and love-bomb me to death and then kick it out from under me and make me feel like I have no worth at all. I kind of accepted who he was, but he wouldn’t accept me.”

When asked by CPP if she had contacted the Johnston County Sheriff’s Office, she said she had tried.

“I called the sheriff’s office, and they wouldn’t do a thing for me,” because it was a he-said, she-said case, Karen Nielsen said.

“He had already told me everything that was going to happen if I ever did a complaint on him, [saying] 'I will make you look so bad. I will tell everybody that you’re crazy.'”

Earlier Wednesday, someone who answered the phone at the sheriff’s office told CPP that there were no criminal cases pending related to Karen Nielsen’s report of domestic violence.

Senate District 11 continues to include all of Nash County, but a change for the 2020 election will include a different and more urban portion of Johnston County than was in the district previously. It is among those where the lines were redrawn late last year after a judicial panel ruled that legislators gerrymandered political districts with a hyper-partisan aim.

The old District 11 included all of Nash County, where Democrats have a substantial edge, plus a strip of Johnston County along its northwestern boundary with Wake County that was primarily rural and helped give Republicans a decided edge across the district.

Barnes said the district’s population has exploded in the past several years, especially on the western side of both counties, the area nearest to Raleigh.

“A lot of farmers are concerned about the growth and the diminishing farmland there,” she said. “I’m hearing they can’t afford to pass up that opportunity to develop their land when you have so many risks in farming with the weather, regulations, commodity prices and the labor supply.”

Barnes, Nielsen and Patrick Harris of Smithfield will face off in the March Republican primary.

Nielsen told CPP that he does not believe women should face domestic abuse but asked, “Do you realize a woman can make a threat, make an allegation, and it may not even be true and destroy a man’s life?”

He compared his situation to that of Supreme Court Justice Brett Kavanaugh. During Kavanaugh’s confirmation hearings before the Judiciary Committee of the U.S. Senate in 2018, he faced questions regarding an alleged sexual incident at a high school party in the 1980s, which Kavanaugh has strongly denied.

Nielsen said he doesn’t know whether Kavanaugh is guilty or not.

“A woman makes a threat and says I did something when I say I didn’t do anything, but it doesn’t matter,” Nielsen said. “So, now I’m a 71-year-old veteran. … I can’t go back to my house. I can’t get my clothes. I can’t do anything, and this woman has put me out of my house for a year, and I’ve not even been to court.”

Nielsen said “the pendulum has swung too far one way” and said the courts believe women without proof.

“We need to have laws that protect men to make sure they don’t become the victims of women who make up these stories and who get control of the houses and control of men’s property and everything,” he said. “They don’t have to prove anything.”

Willing to talk with a female reporter?

Nielsen recently spoke with reporter Kay at the Wilson newspaper regarding his wife’s filing earlier this month. Kay’s article said Nielsen provided a copy of his wife’s complaint to the newspaper.

Kay told CPP that Nielsen refused to speak with a female reporter when he came to the newspaper to provide documents in the case earlier this month.

“He didn’t want to talk to a female,” Kay said. “He was pretty clear about that.”

When asked if Kay heard Nielsen say that Barnes wasn’t qualified because she is a woman, he said, “I am not denying that he said that,” Kay told CPP. “Anyone that knows the colonel knows that’s him through and through.”

When CPP asked Nielsen if he refused to speak with a female reporter, Nielsen said initially, “I never went in to talk to the newspaper.”

When challenged, he doubled down: “I was never interviewed.”

When told that he was quoted in The Wilson Times in an article written by Kay, Nielsen then said he talked to Kay over the phone.

Later in the conversation with CPP, Nielsen said he did go to the office to drop off documents with “the people in the front.”

When CPP told Nielsen that Kay was on record saying he refused to talk with any female reporter, Nielsen paused for several seconds before responding.

“That’s not true,” he said. “Here again, we have the fake news who make stuff up.”

Nielsen said he’d talk to anybody, man or woman.

“Guess what? I think you’re a female, and I think I’m talking to you,” Nielsen said. “I’ll talk to anybody. I know you’re not going to print this stuff. This is what’s wrong with this country. The newspapers make this stuff up.”

This story originally appeared in the Carolina Public Press, an independent, in-depth and investigative nonprofit news service for North Carolina.