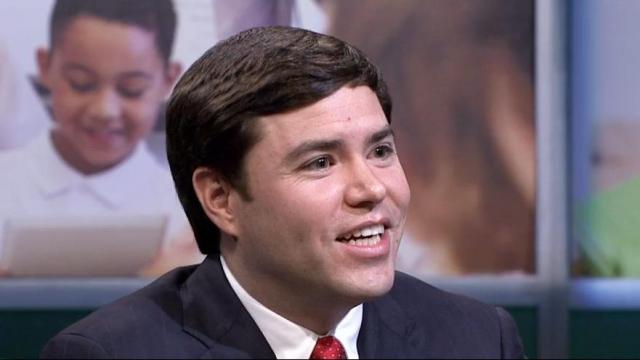 Raleigh, N.C. — North Carolina Superintendent of Public Instruction Mark Johnson, who lost his bid for lieutenant governor Tuesday night, challenged the State Board of Education on Wednesday about a contract signed with the Southern Regional Education Board to study recommendations on changes to the state’s school performance grade system.

Johnson began by saying that the SREB received a “substantial” amount of money from the board for its work. When state Department of Public Instruction staff began looking at the contract, Johnson said, they discovered no evidence that it had been open to a competitive bidding process or that the state board had actually voted on it.

The contract was for $31,000, according to board Chairman Eric Davis. Any contract of more than $25,000 requires competitive bidding.

They spent about 10 minutes discussing what ended up being a dispute over $6,000.

“According to all the information we have now, this is an illegal, ineffective contract,” Johnson said.

Davis acknowledged that there were problems with the contract and said that corrections were being worked through to resolve the issue. He said the SREB has been contacted and that the fee will be scaled back to meet the limitation. He called up Eric Snider, general counsel to the state board, to elaborate on the situation.

“Our friends over at the Department of Administration have been made aware about this contract, which was effectively void from the start because it didn’t follow the right policies,” Snider said.

He added that it’s important to follow policies and procurement laws.

After Davis explained that he was working on fixing the problems with the SREB contract, Johnson asked who was responsible.

“So what happened here?” he asked. “Who was involved in this contract?”

Davis said he took responsibility for the errors.

“Why wasn’t the state board made aware?” Johnson asked.

Snider pointed out that the SREB has been presenting to the state board, so it wasn’t as though work wasn’t being done publicly.

Johnson said that, if the new price for the contract is lower than the original charge after Davis works with the SREB, then that is tantamount to admitting that the state board was using taxpayer dollars to overpay the SREB.

“I know you’re making faces, but the fact that there was no competitive bid for this contract was really upsetting,” Johnson said.

He went on to ask whether Davis was able to say that there are no conflicts of interest between the board and the SREB.

Davis said he could say that.

Johnson asked about appearances of conflict of interests, to which Davis said he trusted board members to have brought them up if there was an issue.

Board member JB Buxton said that his education consulting company had done work with the SREB in the past.

“You were one of the instrumental people in bringing SREB on board,” Johnson said.

Buxton and Davis said Buxton was not involved in the details of the contract; that responsibility laid with Davis.

“No, the state board was responsible for the contract,” Johnson said. “You signed it in violation of the policies that you all put on this agency for contracts to be approved by the State Board of Education for these exact reasons – so that they follow the law, so that there is no appearance of conflict.”

Board Vice Chairman Alan Duncan stepped in to try and end the discussion at that point.

“It’s been acknowledged that there was a mistake made with respect to the policy and that it is being remedied,” he said. “So I appreciate you pointing out a mistake just as it’s the obligation of any of us to point out mistakes in contracting issues and to correct them. So my understanding is it is being corrected, and we’ll move forward.”

The conversation echoed one held in January, only with the roles reversed.

State Chief Information Officer Eric Boyette ended up canceling the contract because proper procedures were not followed, though he told DPI to put out a new emergency contract, which it then approved. The new contract was the same as the old one.

The cost of that contract came in just under $1 million; the state board must be consulted on contracts over $1 million. The board amended that policy on Thursday to require approval for any contract over $500,000.