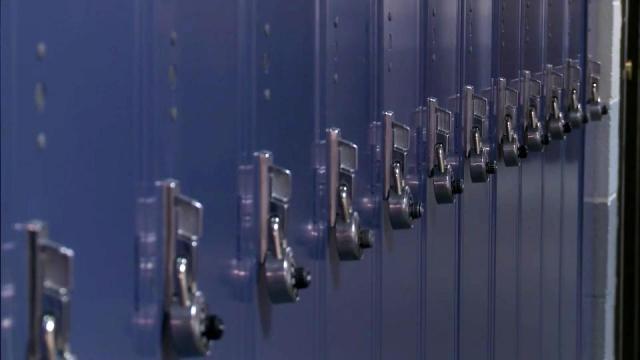 Climax, N.C. — During lunchtime, school counselor Kim Hall takes a break from her desk and roams the hallways of Providence Grove High School.

On her five-minute walk, she encourages a senior to apply to UNC, consoles a student dealing with a scratchy throat and reminds a young teenager to see a teacher.

“We try to make sure that we’re accessible to students during their free times,” Hall says.

Hall has been a school counselor for 29 years. She says she tries to make more time for students as her clerical duties have grown over the years.

When she first started, she was one of four counselors. Today, she is one of two counselors in a school with more than 800 students. That means more work and more school programs to manage.

“Not only have they taken away the number of counselors … but then they have added on more programs and then they think, ‘Oh, who’s going to take care of that? Oh, we’ll have the counselor do it!’” she says.

And it’s not just more programs. Across from her desk, there’s a large stack of folders filled with student test scores. They’ve landed in her office after Randolph County cut its testing coordinators last year.

“[They] need to be filed,” she says. “Things they don’t tell you in school counselor school that you get to do.”

Lawmakers did pass legislation last year to make sure that counselors do not coordinate the actual tests, since that eats up hours and hours of their time.

But, still, their role is more demanding than before, according to Cynthia Floyd, student support services consultant for school counseling at the Department of Public Instruction.

She says that school counselors are sometimes the first ones on the chopping block whenever there is a cut in education funding and school administrators are forced to make tough decisions. Or if other positions are cut, she says, school counselors and other staff often feel the impact as they have to take on more duties.

"Schools just start saying 'we need a warm body to do this here,'" she says. "So you find a school counselor, rather than doing what's in their job description, they're managing student records.'"

Over the years, the job of the school counselor has shifted.

Floyd says in addition to dealing with academics, counselors are handling more and more students who are facing social and mental health issues.

“It’s kind of hard to focus on math or reading when you just saw mom and dad have a knock-down drag-out this morning, and that’s where your school counselor comes in,” Floyd says.

At West Lee Middle School in Lee County, counselor Valerie Nelson says it can be hard to juggle everything when the school is growing and the problems her students face are only getting tougher. She says last year she saw more sexually active and/or pregnant middle school students than she had in her previous nine years combined.

“The kids … they you make laugh, they make you want to pull your hair out, you want to cry with them,” she says. “I really enjoy the role of a counselor, but I just feel like there are so many needs that are students have, I just wish I could address them all.”

School counselor Kim Hall says she feels the same way – that she never goes home feeling like her job is complete.

“You have to figure out which fires are the largest, ya know? When you’ve got fires all around, the one that needs fighting the most is the biggest, so you run to that one,” she says. “Some of the others have to smolder until you get there.”

Even if she can’t fight all the fires, she says she tries her best to make small gestures because she never knows when those will make all the difference.