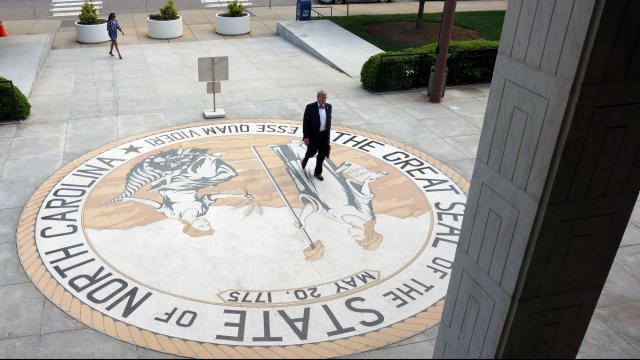 Raleigh, N.C. — Senate Republicans advanced a bill Tuesday meant to prevent lawsuit settlements from shifting election rules without first getting approval from the General Assembly that wrote those rules.

The bill again pits the legislature's Republican majority against Gov. Roy Cooper over control of election procedures. They've sparred over control of the State Board of Elections since before Cooper took office.

GOP leaders are upset over a lawsuit settlement that changed North Carolina's absentee ballot rules after ballots went out last year, adding another six days for people to mail in those ballots and relaxing the state's witness requirement for mail-in ballots.

The legislature had considered both issues as part of a pandemic elections bill and decided against those steps. But a lawsuit brought by the Democratic Party's best known elections attorney, targeting the issues and others, was eventually settled, changing the rules.

The settlement decision fell largely to the State Board of Elections. The bipartisan body initially approved it in a unanimous vote, but the two Republican members soon resigned.

Senate Bill 360 says that, if legislative leaders are party to a lawsuit, it can't be settled without agreement from top legislative leaders. It's titled: "Prohibit Collusive Settlements by the Attorney General," and GOP lawmakers accuse Democratic Attorney General Josh Stein and state Elections Director Karen Brinson Bell of conspiring with plaintiffs in the suit to change the state's election laws.

Stein and Brinson Bell deny the charge. Brinson Bell said in a statement Tuesday that she's never even spoken with the lead attorney in the case, Marc Elias, and that she wasn't involved in negotiations.

The bill cleared the state Senate on a 28-21, party-line vote. If it also clears the North Carolina House and Gov. Roy Cooper vetoes it, the Republican majority doesn't have enough numbers to overturn that veto, and it would not become law.

There was back and forth between partisans Tuesday on just about everything about the bill.

"There was nothing secret nor unlawful nor cooperative," Chaudhuri said, noting that attorneys for Republican lawmakers had a chance to speak against the proposed settlement after the Board of Elections approved it, but before a judge signed off and made it official.

Chaudhuri also noted that Elias and his plaintiffs didn't get every change they sought in the lawsuit, only some of them.

Sen. Paul Newton, R-Cabarrus, in a press conference before the Senate debate, asked reporters to imagine the reaction had the GOP-controlled legislature settled a similar lawsuit with President Donald Trump's re-election campaign. On the Senate floor, he said the settling parties were ideologically aligned, noting that Brinson Bell had called for some of the same changes in election law as the settlement eventually forced.