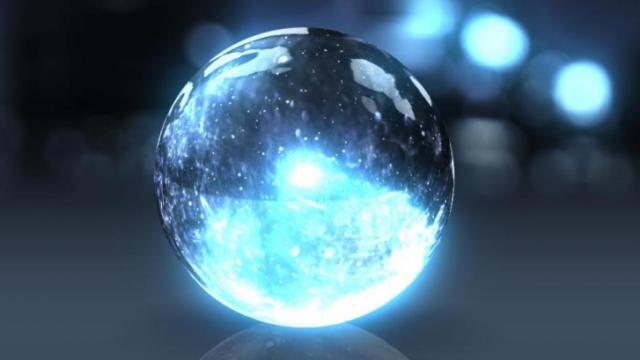 Raleigh, N.C. — Back in June, many of us who cover politics – including yours truly – saw business mogul Donald Trump enter the presidential campaign and said, "This will never last. He'll be done by August."

Well, August came, and Mr. Trump was still around, and we figured, "Hey, this guy will burn out by October."

October came, and Trump, bombast in full throat, rose in the polls.

Don't ask what we said about December.

All of which is to say, predicting the future in politics is a hard business, and not too many of us are good at it. If you have any doubt, take a gander at at how few of last year's political predictions came to full fruition.

One thing that is utterly predictable, though, is our fearless leader here in the newsroom looking me straight in the eye, without a hint of irony, and saying, "Well, you're writing a predictions column for New Year's, right?"

Sure, but this year I'm enlisting help – or at the very least bringing others down with me. After coming up with 10 questions, I put them to WRAL Capitol Bureau Chief Laura Leslie, Public Records Reporter Tyler Dukes and Political Editor Matthew Burns.

On a few questions, we were in lock step. On others, well, let's just say not everyone can be right.

Will GOP presidential candidates still have something to play for when North Carolina voters head to the polls on March 15, or will the Republican nomination be all sewn up?

Matt, Laura, Tyler and I all say the nomination will still be up for grabs, although our logic varies a bit.

Laura and Matt see a Trump versus the field situation happening, where the GOP establishment is trying to prop up someone, anyone, against the outspoken reality television star.

"There's enough money in the field against Trump that they'll keep people in until the convention," says Laura.

My bet is that, out of the first four primary states, Trump will win New Hampshire, although not convincingly, and South Carolina but fall short in Iowa – a caucus state where voters have to literally stand up for their candidate – and Nevada, where they've seen outlandish business moguls before and won't be impressed. After that, he'll fall apart on Super Tuesday, where the ability to organize, nor just grab headlines, matters. The Republican contest that rolls into North Carolina on March 15 will be a scramble among three or four candidates.

My caveat: did I mention I thought Trump would be toast by October?

On the Democratic side, former Secretary of State Hillary Clinton is the consensus pick. While Vermont Sen. Bernie Sanders is providing a useful counterpoint in that debate, he's not garnering enough votes to present a serious challenge.

On the Republican side, we have a very split decision.

Matt's heart really wasn't in the Rubio pick, but he can't bring himself to put his chips on Trump. Laura and I recently covered a Trump event in Raleigh, and she sees enthusiasm for him holding. Tyler is betting big money comes in on behalf of Rubio. As for me, if I believe the chaos scenario I laid out above, the next question becomes who thrives in that sort of chaos. My bet is voters roll home to the familiar, if boring, name of the former Florida governor.

Will the $2 billion bond package on the primary ballot pass?

Here, too, the answer was yes across the board. Laura questions the branding – "They're still calling it Connect NC. People will think it's for roads." – but none of us see any serious opposition coming along.

Who will win the national Republican and Democratic presidential nominations to run in the General Election?

Once again, we all four see Clinton taking the Democratic nomination. And once again, we're split on the Republican answer.

Tyler adds, "I'm still perplexed as to why (New Jersey) Gov. Chris Christie isn't doing better." Laura says its because Trump has taken the Republican conversation too far to the right, undercutting Christie's preferred position as the law-and-order candidate.

Like me, Laura is tempted by the lure of Bush thriving in the chaos of a brokered convention, but we both suspect he'll have run out of steam by then.

Still, the GOP hasn't had a truly brokered convention since the 1950s. My betting is that Christie will emerge with a strong second-place showing in New Hampshire and pick up enough delegates along the way – particularly in Northeastern and Western states – to be the most convincing "anyone-but-Trump" option, if he doesn't have the delegates outright to claim the nomination.

Which Democrat will emerge to take on Richard Burr, and who wins the general election showdown?

All four of us see former state Rep. Deborah Ross as most likely to emerge from the four-way scrum. As Laura said, she's got some practical organizational and fundraising advantages that we've seen get others, such as then-state Sen. Kay Hagan running in 2008, past the primary hump.

Burr has his own primary against three opponents, including Dr. Greg Brannon of Cary, a last-minute entry into the race who last ran in 2014, placing second to now U.S. Sen. Thom Tillis.

However, all four of us see Burr taking on Ross and Burr as the likely winner.

Which incumbent, state or federal, is most likely to be upset?

Tyler, Laura and I all ran right to 2nd District Congresswoman Renee Ellmers, who is facing four Republican primary opponents and a conservative electorate that has been unhappy with recent budget deals in Washington. Our thinking runs that the same anti-establishment rumors that took down former House Speaker John Boehner could plague the three-term incumbent. The high-rolling Club for Growth has thrown its support behind Jim Duncan in the race, and veteran campaigner Frank Roche has been a steady critic of Ellmers.

Matt differs, saying that McCrory is the most vulnerable incumbent on his board. It's not that he's terribly unpopular, Matt argues. "I just think there are enough people who aren't impressed by him." McCrory pledged to clean up the good-ol'-boy system in Raleigh, but Matt points out he has been dogged by stories like the one surrounding a prison contract given to a campaign backer that could drag on his campaign.

Laura and I also think Democratic State Auditor Beth Wood's campaign against Republican Chuck Stuber, a former FBI agent and State Board of Elections investigator, is one to watch. Auditor isn't an office that a lot of people put thought into, and it's a race the GOP could pick off, even against an incumbent who has gotten good reviews from officials in both parties.

Will Republicans maintain their super-majorities in the state House and Senate?

The threshold here is three-fifths of the chamber, the votes need to override vetoes and pass constitutional amendments.

For the state Senate, all four of us say yes. Republicans hold 34 of the chamber's 50 seats, and Democrats would need unusually good luck to dislodge more than four incumbents. When they redistricted following the 2010 census, the GOP built sturdy state Senate districts.

Laura, Tyler and Matt were all firm in saying Republicans would keep their House super-majority. Right now, they effectively hold 75 seats – including one unaffiliated member who caucuses with the GOP – out of 120. The GOP has been on a four-year roll in North Carolina, and there's not an outward sign that it's ready to abate.

I'm the minority report on this one and think it's possible that Republican membership in the House drops below 72, the magic number in the House for veto overrides and such.

Looking back to 2014, Rep. Tom Murry, R-Wake, lost a close race to Democrat Gayle Adcock, in part due to shifting suburban demographics in Wake County. Given strong enough challengers and continued immigration into North Carolina, it wouldn't be a stretch for shifting suburban districts to turn out one incumbent each in the Charlotte, Greensboro, Raleigh and Wilmington areas. That scenario becomes all the more likely if the national convention nominates a presidential candidate not to the liking of those in the 'burbs.

Lawmakers are starting their short session early. Does this mean they'll actually be done by July 15, or will there be another budget standoff this year?

Laura, Tyler and Matt are betting on lawmakers doing the sensible thing and getting out of Dodge, er, Raleigh, with plenty of time to go campaign and before a protracted legislative session hammers poll numbers.

"What else do they have to do?" asks Matt, who adds, "I would think they'll have enough money (in the budget) to go around."

That's where I get nervous. You may think you've seen lawmakers scrap in a year when they have to cut the state budget, until they hit a year like last year when there's some money to spread around and disagreements over how to do it.

Laura argues back that the wave of legislative leaders getting ready to retire, including Sen. Bob Rucho, R-Mecklenburg, Sen. Tom Apodaca, R-Henderson, and Rep. Paul "Skip" Stam, R-Wake, will mean nobody is in the mood to stick around. I argue the opposite. Outgoing leaders will want to make sure they leave their mark on the way out and won't want to compromise what they see as their legacies.

It may not be a session that nearly bleeds into October, but I'm taking the over.

Assuming a showdown between Republican Gov. Pat McCrory and Democratic Attorney General Roy Cooper, who will be sworn into office in 2017?

Laura: Our bureau chief gives us the verbal equivalent of the ¯\_(ツ)_/¯ symbol so popular on the Internet these days. "I'm pushing," she said. McCrory may not be the strongest incumbent ever, but she can't yet build a case for Cooper.

Matt: Cooper. Remember, Matt thinks that McCrory is the most likely incumbent to be upset.

Mark: I'm really tempted to throw in with Laura and push, but for the opposite reason. Cooper has been a strong candidate in the past three election cycles, even when fellow Democrats higher up on the ticket haven't done as well. He won in 2012 despite Obama getting edged for North Carolina's electoral votes and Democratic Lt. Gov. Walter Dalton falling to McCrory. Unlike Matt, I think McCrory has enough of a record, and enough support among mainstream Republicans, to carry him into a strong showing in November. So, I'm going to bet on incumbency and plenty of campaign money – although I'm not all that convinced about it – and say McCrory will win. My caveat: if the GOP does nominate Trump for president, Cooper takes the governor's mansion.

Will Speaker Tim Moore keep the top job in the state House following the November elections?

This question came up late in the vetting process and stems from infighting between Moore and conservatives in his party and his caucus, including Rep. Justin Burr, R-Stanley, who has publicly blasted the speaker's leadership. Rep. David Lewis, R-Harnett, has also come in for criticism from conservative members and is the subject of a House Ethics Committee complaint as a result of some of the infighting.

Laura, Tyler and Matt are all pretty sure we'll have Speaker Moore to kick around for another term.

I'm less confident because some of the suburban districts most at risk for Republicans are held by incumbents such as Rep. Marilyn Avila in Wake County and Rep. Charles Jeter in Mecklenburg County, who are senior lawmakers more likely to back Moore in a nomination fight. But I'm going along with the crowd on this one, only because I don't see the Burr faction of the House caucus picking up quite enough members to force the issue.