Men wed after after initial denial by Pasquotank magistrate 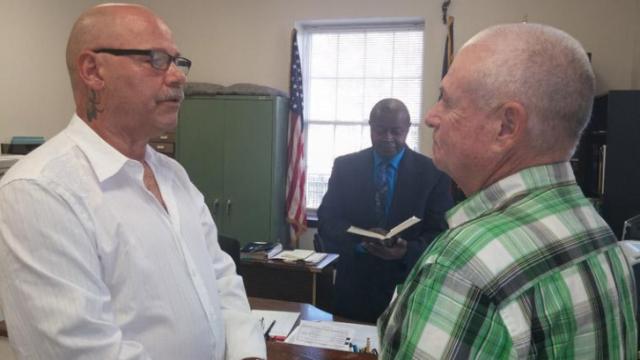 Magistrate Gary Littleton refused Monday to marry William Locklear and Randall Jackson, citing his religious views that marriage should be between one man and one woman.

Another magistrate on Tuesday married the couple, who has been together for 31 years.

Chief District Judge Christopher Bean met with all county magistrates about the matter on Tuesday and said if a formal complaint was filed, he would investigate the allegation that Littleton, who is not seeking reappointment when his term ends in December, refused to wed the men.

So far, no complaint has been filed, and Jackson told the newspaper that he and Locklear do not plan to file one.

Littleton's position conflicts with advice provided Monday in a memo from the North Carolina Administrative Office of the Courts that all judicial personnel accommodate same-sex couples just as they would heterosexual couples.

In Alamance County, clerks and magistrates are facing a similar dilemma.

The Burlington Times-News reported that Register of Deeds Hugh Webster said that "about half" of his employees are not comfortable issuing marriage licenses to gay and lesbian couples and that he will fill in for those employees.

Chief District Judge Jim Roberson, who oversees Alamance County magistrates, offered a similar solution, saying those comfortable with same-sex marriage would step in for those who are not.

Chris Sgro, executive director of Equality North Carolina, said Wednesday that the group is "extremely concerned" about the reports and is continuing to monitor the situations.

"We will expect no less than full and equal access to marriage as afforded by North Carolina law," Sgro said in a statement Tuesday.