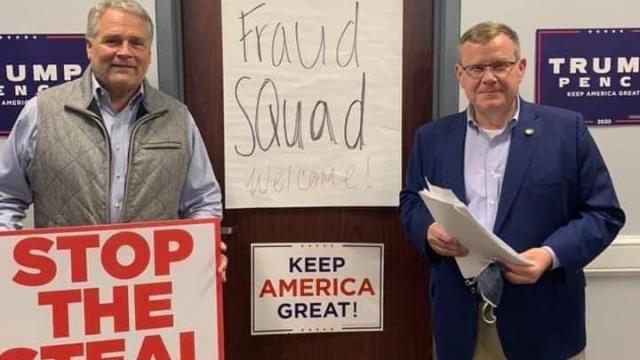 "There's only a few days left in the president's term," House Speaker Tim Moore told reporters Wednesday. "If we go down this road, it's only going to, again, further inflame passions and divide the country."

Senate President Pro Tem Phil Berger said much the same thing in a statement last week, after Gov. Roy Cooper, a Democrat, said the president should resign or be removed.

“The U.S. Constitution designates Jan. 20 as the date when power peacefully transfers," Berger, R-Rockingham, said. "After the tumult of the past 24 hours, we should take care to lower the temperature, not raise it through actions that will cause yet more division.”

The U.S. House of Representatives voted Wednesday to impeach the president. Ten Republicans sided with the Democratic majority on the vote. None of North Carolina's Republican members supported impeachment, but all North Carolina Democrats voted for it.

Berger and Moore condemned last week's violence at the U.S. Capitol and said those involved should be arrested and prosecuted. Moore, R-Cleveland, who was asked several questions on the issue Wednesday as the state legislature got back underway, said this has "been a wake-up call to a lot of people that we can and we have to do better."

Asked specifically about the president's rhetoric in the lead-up to the attack, Moore said elected officials "have a duty to always be mindful of what we're saying and be truthful to the people."

Moore traveled to Philadelphia shortly after the presidential election to check in on Republican efforts there to investigate allegations of fraud. He posted pictures to social media from the trip with Rep. Kelly Hastings, R-Gaston.

In one of them, Hastings is holding a "Stop the Steal" sign, and the two men are outside a door labeled, in large hand-written letters, "Fraud Squad." In more recent days, Democrats have passed the picture around on social media, calling for Moore to be held accountable for his own rhetoric.

The speaker, who is also an attorney, said he went to Pennsylvania to review fraud claims there.

"At the end of it, my conclusion was that they couldn't prove (it)," he said Wednesday. "After that visit there, you didn't see me say anything else about it."

Asked whether he regretted anything he or of his fellow Republicans in the North Carolina House said about the election or whether rank-and-file Republicans bear any responsibility for inciting the riot at the Capitol, Moore replied "absolutely not."

"But I do think we need to put blame where it goes," he said. "There were people there, they did wrong, and they need to be held accountable for what they did. You're not going to ever hear me defend somebody who did that."

Berger, in his statement last week, said this principle holds for mayhem, regardless of the political cause.

"Rioting, looting and destroying property is unacceptable under any circumstances," Berger said in his statement, which WRAL News requested after the governor called for Trump's removal. "It was unacceptable at the federal courthouse in Portland, [Ore.,] where violent extremists also targeted law enforcement officers; it was unacceptable in downtown Raleigh, where businesses and government property were destroyed; and it’s especially contemptible at the seat of the people’s government in Washington with Congressional business underway."