"I intend to work with all to find, develop and expand common ground where it may exist," Senate President Pro Tem Phil Berger said after being sworn in for his sixth term as Senate leader. "I’m under no illusion that agreement can be reached on every matter that comes before us. This institution is a venue to explore the opportunities that may exist for finding common ground."

"North Carolinians expect us to put politics aside and create a state government that attracts success," House Speaker Tim Moore said after he was sworn in for his fourth term leading that chamber.

Rep. Robert Reives, D-Chatham, who now leads House Democrats, called for Moore's unanimous election as speaker as a sign of cooperation, adding that Republicans also need to cooperate with Democrats on policy and budget issues in the coming months.

"The events of the last couple of weeks have made one thing clear: We've got to come together," Reives said. "All voices should matter, and all voices should have an opportunity to be heard."

Similar calls for unity in past sessions have quickly fallen by the wayside, but Reives noted that the coronavirus pandemic has cast a new light on the General Assembly.

"Disagreement is healthy and makes for better ultimate outcomes," said Berger, R-Rockingham. "Disputes becomes unhealthy, though, when political posturing derails sound policy. We must all guard against having the politics of an issue override the policy of an issue."

The pandemic cut into the traditional pomp of opening day, when lawmakers' families usually crowd the floor to see them sworn in. On Wednesday, relatives of new members of the 170-person General Assembly were allowed to watch from the galleries.

During the brief session, Senate Minority leader Dan Blue obtained a commitment from Berger to enforce mask-wearing by senators, staff and others in the Senate chamber until the pandemic is over or most people have been vaccinated against the virus. Blue, D-Wake, said he planned to push for a change to Senate rules to require masks if Berger wouldn't agree to "encourage and cajole" people into wearing them. 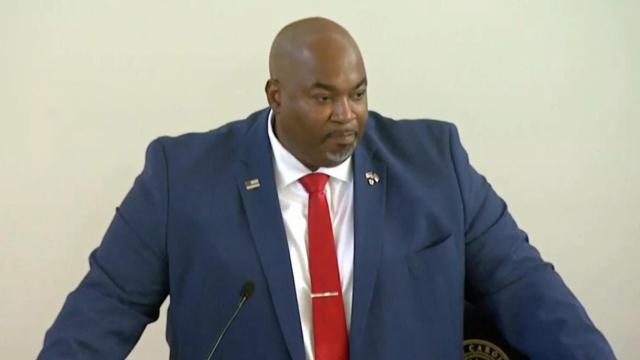 Republican Lt. Gov. Mark Robinson also took a moment during his first day presiding over the Senate to reflect on his own journey to the state's second-highest elected office. He said he grew up in a rat-infested house in Greensboro and only a few years ago worked in a factory in High Point.

The legislature will take the next two weeks setting up committees and getting bills filed before lawmakers return Jan. 27 to start their work for the year.

Berger and Moore, R-Cleveland, said after Wednesday's session that they will probably take action first to get coronavirus vaccines distributed faster and to help students catch up after months of remote learning during the pandemic.