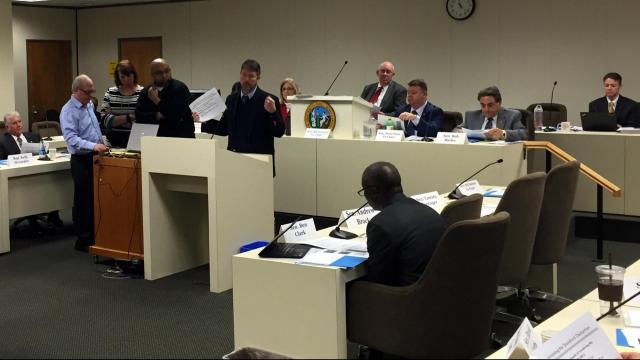 The potential cut, which is not yet a formal proposal but is being discussed by top leaders, would likely lower the taxes people pay on money earned this year when they file their returns in 2017.

"I will say we're seriously looking at this," said Rep. Bill Brawley, R-Mecklenburg, a chairman of both the Revenue Laws Study Committee and the House Finance Committee.

"We're talking about it," said Sen. Bob Rucho, R-Mecklenburg, who is both a Revenue Laws chairman and a chairman of the Senate Finance Committee. "It is something I would like to see done."

Barry Boardman, the legislature's chief economist, gave lawmakers an overview of how tax rates would change if they followed a set of cuts put forward in a state Senate bill last year. That measure would have raised the standard deduction to $8,750 for individuals and $17,500 for married couples.

The changes would cost the state somewhere between $195 million and $205 million per year, according to Boardman. That's money that would either have to be offset by cuts to the state's $21 billion budget or increased tax collections from other sources. If tax returns filed this April give the state more money than expected, however, lawmakers could push forward with a tax cut without cuts to the budget.

If the changes that Boardman outlined go into effect, roughly 70,000 people who currently make just enough money that they have to pay some tax would end up paying nothing in taxes for the year.

No member of the committee spoke out against the proposal, which is only in its nascent stages. Brawley said the committee would review, and likely vote on, a fully drafted bill in March. That would send the measure as a recommendation to the General Assembly.