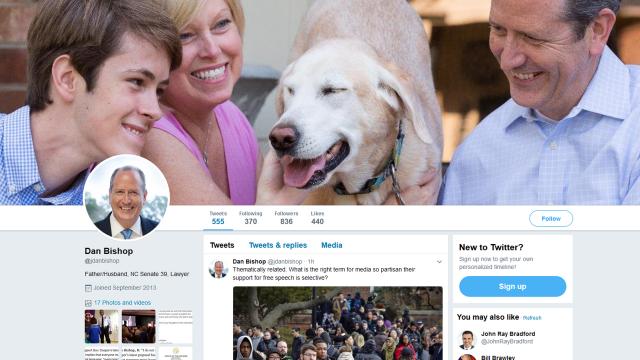 Raleigh, N.C. — A North Carolina state senator posted a series of tweets Wednesday referring to various news outlets as "jihad media" in response to stories with which he disagrees.

Sen. Dan Bishop, R-Mecklenburg, is in his first Senate term after serving one term in the state House. He's best known for his support for House Bill 2, the now-repealed law that brought the state international attention by restricting transgender access to public bathrooms and excluding the LGBT community from discrimination protections.

Bishop's relationship with the media has been contentious at times, but this appears to be the first time he has likened reporters to terrorists.

The first reference was to an Associated Press story about the special election won by Republican Karen Handel in Georgia's 6th Congressional District.

Jihad media freight just about every story. Look at this AP story on #GA06. https://t.co/kbGRhRJpFH

The second, early Wednesday evening, was in response to a tweet by conservative commentator Dinesh D'Souza about a CNN report on an attack at the airport in Flint, Mich., in which a police officer was stabbed.

Later Wednesday evening, the target was a story in The News & Observer newspaper in Raleigh about a budget provision.

Bishop defended his use of the term "jihad media."

"The media's ideological crusade is now so intense that many news reporters openly abandon even their pretense of objectivity. I did intend to use a term to fully convey that state of affairs," he said in an email to WRAL News.

How can I "disagree" with a "news" story? Isn't it supposed to be facts? Or is it a jihad: "any vigorous, emotional crusade"? https://t.co/wxq6XJHmpn

A spokeswoman for Senate President Pro Tem Phil Berger neither condoned or condemned Bishop's comparison of media to terrorists. But she did compare it with inflammatory language thrown at lawmakers by Rev. William Barber, state president of the NAACP.

"It would probably be helpful for all sides to tone down the over-the-top rhetoric against those involved in various forms of public service, including so-called religious leaders using incendiary terms like ‘all-white extremists,’ ‘hijackers’ and ‘criminals’ to describe public officials. (We have not seen the media hold those people to account.)," spokeswoman Shelly Carver said in an email to WRAL News. "While Sen. Berger wouldn’t have used those words, he certainly understands Sen. Bishop’s frustration with the overt liberal bias of some of the state’s reporters."

Andy Bechtel, an associate professor at the University of North Carolina at Chapel Hill's School of Media and Journalism, said "jihad" is defined in the Merriam-Webster dictionary as "a crusade for a principle or belief," adding that he doesn't see any "crusade" by the media organizations targeted by Bishop.

"I see factual reporting," Bechtel said in an email.

John Robinson, a lecturer at the School of Media and Journalism, and Steven Greene, a political science professor at North Carolina State University, concurred.

"It appears he's following President Trump's playbook and demonizing the media," Robinson said in an email. "I can't read his mind, but my guess is that most people think of 'jihad' as a word used by terrorists. Even using his definition, I can't see the word accurately describing legitimate news coverage of the legislature's budget."

"It is exactly the type of loaded, symbolic term one might use preaching to the choir of the Republican base, which is presumably very much Bishop's audience on Twitter," Greene said in an email. "This seems of a similar intellectual vein of President Trump referring to the media as 'the enemy of the people.' Complaining about the 'bias' of very middle-of-the-road mainstream media has been a trope of the Republican right wing for years; this is just taking it to a new level. That said, when one considers the absolutely fundamental role of free media in a properly functioning democracy, this is not the type of rhetoric which should be a part of reasoned political debate."