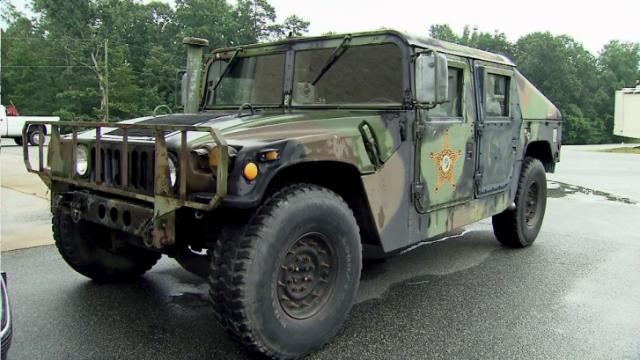 Law enforcement agencies across the state lost access for up to a year to the 1033 Excess Property Program in early March. The ban affects North Carolina police and sheriffs' departments as well as state-run agencies such as the State Highway Patrol.

State and local agencies can neither receive nor transfer any 1033 property under federal rules.

The federal Defense Logistics Agency, which runs the 1033 program, requires state officials to track the gear they receive annually. In North Carolina, that job falls to the Department of Public Safety, which coordinates how equipment is distributed.

"It was very, very different from what had been required and the internal processes of the past," Walker said. "It was much more detailed, much more technical."

"At that time, our folks knew that they were not sufficiently staffed," Walker said. "They pulled in people internally, but after a while, they determined they weren't going to make it."

North Carolina is one of only three states, including Minnesota and Alabama, currently suspended.

It took the state another six months, working with the North Carolina Sheriffs' Association, to finish the equipment inventory and submit it to the federal agency in July, Walker said.

She said the agency spent that time gathering the information from agencies across the state. Although she said DPS officials have met the federal reporting requirement, she couldn't say whether the state's 1033 gear is all accounted for.

"I haven't asked that question," Walker said. "I was assured that we have every indication that suspension will be lifted for the state."

That won't come until December, when the DLA completes its next audit.

Meanwhile, the state agency says it won't release specifics about which law enforcement agencies received tactical equipment like rifles and mine-resistant vehicles under the program.

Walker said the state is permitted to receive equipment if it's requested before the suspension date.

Law enforcement agencies in Jackson County, which the state refuses to identify, also received three .45-caliber pistols after the ban.

DLA Media Relations Chief Michelle McCaskill said federal agencies, which may be included in the county numbers, would not be affected by the ban. The federal agency also refuses to detail tactical equipment by agency.

Questions remain about other agency bans

Reasons for the other agency suspensions were less clear.

Walker said suspensions can occur if agencies don't account for a certain piece of equipment, which under 1033 can be anything from a locker or cargo trailer to a riot shotgun or mine-resistant vehicle. In other cases, agencies may earn a ban for inappropriately transferring gear to other departments.

Although she couldn't speak to issues at the other agencies, Walker chalked up the Highway Patrol's suspension to a "paperwork discrepancy" with a piece of equipment the agency couldn't account for following the transfer of a division in 2004.

Walker wasn't sure what the piece of equipment was or when the error was discovered, although she said it didn't take 10 years to identify.

"It was discovered previously, but it's still on the radar of the federal program," Walker said. "There have been emails back and forth."

She also couldn't be sure officials at the Highway Patrol even knew they were on the suspension list.

Calls to six other agencies on the suspension list were not returned Monday. An official at another agency would speak only on background, because he didn't know enough about the details of the suspension.

The Highway Patrol referred questions to Walker at DPS, which oversees that law enforcement agency.

The federal 1033 program has drawn fire from the public in the wake of the police response to protesters in Ferguson, Mo. For days, officers in the St. Louis suburb donned camouflage and body armor, fired tear gas and aimed rifles at residents who gathered in the streets after the shooting of 18-year-old Michael Brown by police on Aug. 9.

Critics say the availability of military weaponry in a time of falling crime rates can escalate violence and erode public trust.

The uproar over Ferguson prompted President Barack Obama to order a review of the 1033 program two weeks after the incident. The U.S. Senate began its own hearings Tuesday.

But Edmond Caldwell, executive vice president and general counsel of the North Carolina Sheriffs' Association, calls much of that criticism "misguided."

He said much of the equipment agencies receive under the program is only used for extraordinary circumstances that happen rarely.

"You don't go to serve a jaywalking ticket with an M16," Caldwell said. "But if you go into hostage situation, you might need one."

Although a year-long ban isn't crippling, he said a wholesale shutdown of the program would have a significant impact on law enforcement.

"The program is certainly very important to police and sheriff's agencies across the state," Caldwell said.

CORRECTION: A previous version of this story incorrectly reported that a reorganization at the N.C. Department of Public Safety resulted in the office charged with tracking 1033 gear being "insufficiently staffed." Instead DPS officials say they discovered the insufficient staffing of the office after the reorganization.

A previous version of this story also incorrectly reported the amount of general purpose equipment acquired by agencies after the suspension date. That number was 29, not 165.

Data provided by the federal Defense Logistics Agency as of Aug. 25 shows agencies suspended from participation in the 1033 program, including the states of North Carolina, Minnesota and Alabama.