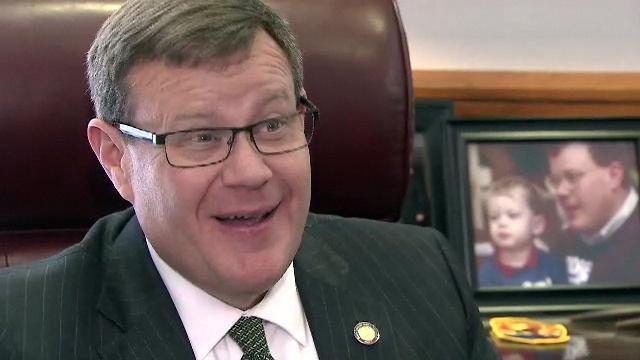 Raleigh, N.C. — House Speaker Tim Moore, who has power over whether bills live or die, is suing a company making one of the biggest lobbying pushes of this legislative session: Duke Energy.

Moore, R-Cleveland, is the lead attorney in a negligence case out of Cleveland County. A farmer there was electrocuted in April 2016 when the sprayer boom on his tractor lifted into a power line.

A lawsuit Moore filed on the family's behalf last year argues that Duke's line was too low. House Rules Chairman David Lewis, who used to own a tractor dealership, is a paid expert witness in the case, testifying about the sort of tractor involved.

Moore said Monday that he doesn't see a conflict of interest and that he disclosed the lawsuit's existence to the House Republican Caucus. He said Duke has not tried to curry favor with a settlement proposal as the company's lobbying team works to pass Senate Bill 559, a potential major change in the way North Carolina sets electricity rates.

That measure has bipartisan support but also bipartisan opposition. The House tried to turn the measure's more controversial section into a study bill earlier this year, which would have delayed the changes Duke wants.

Lewis, R-Harnett, is the bill's sponsor and one of its more vocal supporters in the General Assembly. Moore said he supports the bill, but he expressed some reservations about bringing it to the floor earlier this session because it divided his caucus and he had concerns that Gov. Roy Cooper may eventually veto the bill.

The Senate stripped away the House study, putting the bill back into a form Duke prefers and passing it earlier this month. Lewis said it will be back on the House floor Wednesday, signaling it's about to pass the full General Assembly in that form.

Moore called the lawsuit "very contentious" and said it will likely go to trial. That trial was once slated for November, but Moore said it's been pushed back to February.

A Duke spokeswoman said the company is "defending this case just as we would any other personal injury action against the company."

Many lawmakers are also attorneys, and they aren't required to reveal their clients. Those who follow the legislature closely were split this week on whether Moore's case is a conflict of interest.

WRAL News reached out to a number of current and former lawmakers who are attorneys, as well as some lobbyists, laying out the basics without naming Moore or Duke: a powerful lawmaker with a case against a company that has important legislation pending.

Some, from both sides of the aisle, were willing to speak on the record, and some were not. Their responses ranged from "It stinks" to "I don't see too much wrong with it."

Bill Gilkeson, a longtime staff attorney at the General Assembly before going into private practice, said there's an appearance of conflict, but North Carolina has a part-time legislature and people have to earn a living.

"If they asked me if they should disclose it, as a piece of advice, I would say yes," Gilkeson said. "Otherwise, somebody like you might write a story and make them look bad. But that's not legal advice."

Former House Republican Majority Leader Paul "Skip" Stam, an attorney in Apex, said he'd need to know more details, but it's probably not a conflict. It stretches the imagination, he said, to think someone would use a lawsuit to press legislation.

"My experience is that I've never gotten a company to pay more because of anything that tangential," Stam said. "It's not something that's really controlled by lobbyists. The lawyers handling that would go berserk. ... That is so unlikely that you would get one extra dime."

Jane Pinsky, director of the North Carolina Coalition for Lobbying and Government Reform, said a legislator in this situation should be "obligated to inform his colleagues that it is a conflict of interest."

Though the attorneys and others polled on the issue weren't told it involved the speaker, it wasn't hard to figure out with a little effort, and at least one statehouse insider said he thought this was already widely known.

House Democratic Leader Darren Jackson put two and two together after WRAL News reached out and said he definitely saw a conflict.

"You're demanding multimillion [dollar] settlements while you're holding their biggest bill in your chamber," said Jackson, a personal injury attorney in Wake County.

Jackson said Moore and Lewis are both "clearly in a conflict."

Moore's client list has gotten him unwanted attention before. He's Cleveland County's attorney, and his paid work for a Durham area development that he also helped save with key legislation, as well as work he did in 2012 for a bail bonds group, drew inquiries from Wake County District Attorney Lorrin Freeman last year.

Freeman announced in January that her review "found no misuse of public office for private gain or other wrongdoing."