NC has paid off unemployment debt 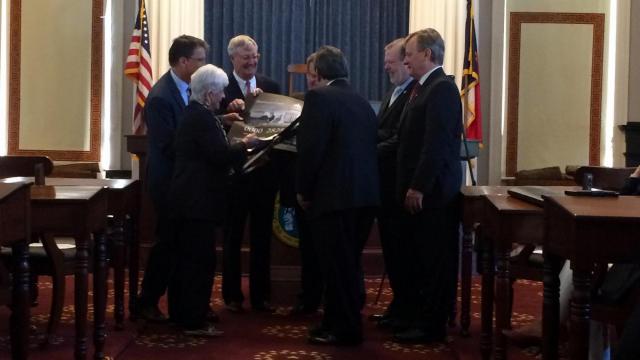 Raleigh, N.C. — North Carolina no longer owes $2.75 billion it borrowed from the federal government pay first-time unemployment claims during the recent recession, action that will translate into lower taxes for employers.

"This is not just about repaying debt we owe to the federal government. This is about creating jobs," Gov. Pat McCrory told a gathering of lawmakers, business leaders and cabinet officials Tuesday in the old House chambers at the historic State Capitol.

Businesses pay two basic types of unemployment taxes – federal and state. The federal, or FUTA, taxes state employers will pay on Jan. 1, 2016, will be about $280 million less than they were this year. State unemployment taxes, or SUTA, are going to remain steady for roughly another year until the state's unemployment reserve fund tops $1 billion, then they will drop as well.

All told, North Carolina employers can figure to pay $700 million less a year in unemployment taxes starting in 2017 than they paid in 2014.

However, paying off the debt more quickly came at a cost to workers. Changes to North Carolina's unemployment insurance system triggered cuts to long-term federal benefits in the state. Roughly 71,000 workers who had been among the long-term unemployed lost benefits immediately on July 1, 2013, while another 100,000 unemployed workers lost access to long-term benefits that would have otherwise begun later than year. Funding for federal long-term benefits ran out nationwide on Jan. 1, 2014.

Longer term, North Carolina's benefits became less generous, shorter in duration and forced unemployed workers to take jobs that paid less or required fewer skills than they were used to.

Worker advocates argue businesses got a tax break on the backs of workers.

"The reality is that the vast majority of the debt was repaid not by employers but by jobless workers," said Alexandra Sirota, director of the North Carolina Budget and Tax Center, a liberal-leaning policy think tank.

Cuts to benefits, she said, weren't mirrored by commensurate increases in SUTA taxes. She added that $1 billion is not enough of a cushion to prevent future shortfalls in the trust fund.

Cutting up the credit card

To symbolize the debt payoff, lawmakers used a pair of giant scissors to cut a mock giant credit card in half.

Like many states, North Carolina had to borrow from the federal government during lean times in 2009 through 2012 to pay for unemployment benefits when FUTA and SUTA taxes on employers could not keep pace with payments to large numbers of laid-off workers. North Carolina's debt situation was frustrated because, in prior years, the state had scaled back what employers paid to cover unemployment insurance.

"We just started piling up debt and figured someone else will take care of it," McCrory said.

Really, the money would always have come from employers. However, if left unchanged, North Carolina law would have put the state on course to pay off the debt some time in 2020.

Business leaders urged lawmakers to chart another course. They pointed out that FUTA taxes would increase $22 per employee per year until the federal debt was paid off.

"The debt to the federal government was a tax on jobs," Senate President Pro Tem Phil Berger said.

Berger, McCrory and others said employers were slower to hire new workers because of the added costs involved.

"That was money you could not reinvest in your business," said Andy Ellen, president of the North Carolina Retail Merchants Association, one of a coalition of business groups that pushed for the changes.