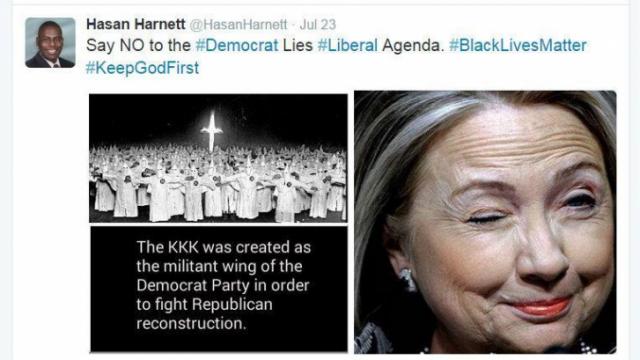 "Say NO to the #Democrat Lies #Liberal Agenda. #BlackLivesMatter #KeepGodFirst," Harnett wrote in one of the posts to Twitter, which also included pictures of the former secretary of state winking, a gathering of Klansmen and the words, "The KKK was created as the militant wing of the Democrat Party in order to fight Republican reconstruction."

"The chairman isn't going to comment or give interviews on tweets, but as the first black chairman of the North Carolina Republican Party, he believes we have to learn from history and move past it," state Republican Party Executive Director Todd Poole said.

Clinton's campaign did not respond to a request for comment sent via email.

Ford Porter, a spokesman for the state Democratic Party, said, "Chairman Harnett's troubling comments pretty much encapsulate the current Republican brand in North Carolina: inflammatory rhetoric, a little unhinged and completely focused on anything and everything other than creating jobs or improving our schools. It's no wonder that everyday families are ready for a change in Raleigh."

Like Republicans across the country, North Carolina's GOP is trying to attract more black, Hispanic and other voters to their banner. In North Carolina, 45 percent of registered Democrats are black, compared with just under 2 percent of Republicans. Put another way, 83.7 percent of all registered voters who identify themselves as black as registered as Democrats, 13.7 percent as unaffiliated and 2.5 percent as Republican, according to late-2014 voter registration totals provided by the State Board of Elections.

Pointing to a fraught racial history in which Democrats of the post-Civil War era benefited from violent acts of the KKK might be a way to swing that balance.

Duke University political science professor Kerry Haynie said Harnett's tweets represent "a knowing disregard for historical truth." He called the implication that Clinton and the Klan are somehow linked, "an outrageous untruth that has no place coming from a responsible political party."

Haynie characterized it as "race-baiting."

Ferrel Guillory, a University of North Carolina at Chapel Hill journalism professor and director of the school's Program on Public Life, said Harnett is, at a minimum, ignoring decades of political reality.

"This kind of smear ad just ignores a century of the history of political change and the shifting coalitions of the two major political parities over the last half century," Guillory said. 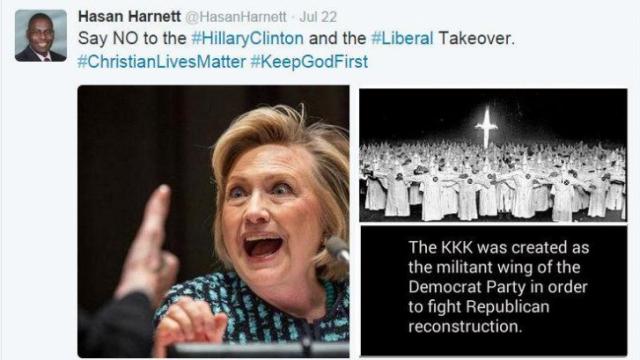 Recitations of Southern political and racial history are complex and don't lend themselves to shorthand explanations. However, it is certainly true that, during the Reconstruction period following the Civil War, the politicians who pushed to include former slaves and other blacks into civil society were by and large Republicans. While President Abraham Lincoln, the party's assassinated standard bearer, was a hero in the North, he and his party were reviled by many whites throughout the South.

When the Reconstruction era ended, the Klan and other violent groups intimidated black citizens in numerous facets of public life, actions that were sometimes taken in concert with Democratic politicians. For example, what is now known as the Wilmington Race Riot of 1898 violently drove a coalition of Republican and black citizens, known as Fusion Party, out of power.

The member states of what had been the Confederacy became a solidly Democratic stronghold during the early 20th century, where the party controlled all of the levers of government.

But in the intervening years, Guillory points out, all Democrats weren't racists, especially during the mid-century turmoil of the civil rights era. Terry Sanford, a former North Carolina governor, U.S. senator and presidential candidate, helped lead a wing of the party that pushed back against overtly racist policies, Guillory said. On the national level, Democratic President Lyndon Johnson signed the Civil Rights Act of 1964 and the Voting Rights Act of 1965.

In particular, historians see Johnson's actions marking the beginning of a political migration of white social conservatives, who initially became ticket-splitting JessieCrats, so named for former Republican U.S. Sen. Jesse Helms of North Carolina, and then make the switch to the GOP in large numbers.

Guillory argues that Clinton, in particular, comes from a wing of the Democratic Party that has fought against racism.

"The truth is that Hillary Clinton, as well as her husband, have been part of the political forces in the South that have fought against the retrograde tendencies in the South.... To try to smear Secretary Clinton with an ad like this is just not credible at all," Guillory said.