NC elections board to meet again, may reverse on voting machines 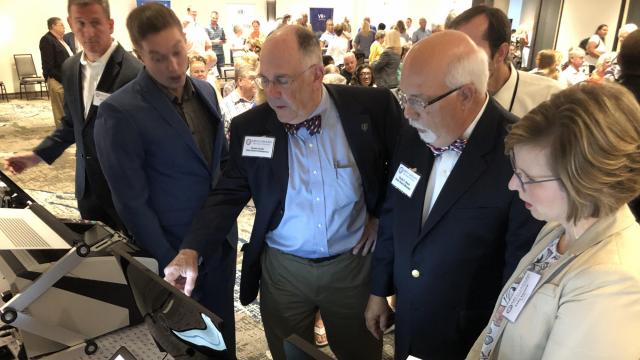 Raleigh, N.C. — The State Board of Elections will meet again Thursday and may reverse a decision it made Monday night to move toward requiring hand-marked paper ballots in future elections.

The board voted 3-2 Monday to hold a meeting next month to change state requirements for new voting equipment. The reason for the delay? Public notice requirements. The board had to wait at least 15 days to change those rules.

But the language proposed Monday for consideration next month would have effectively shot down new equipment from a vendor that uses touchscreen voting but produces a paper ballot that records people's votes via bar code.

Activists who don't trust these machines hailed the bipartisan vote as a victory, albeit a temporary one subject to another vote in August.

Late Tuesday morning the state board sent out notice a separate meeting for Thursday. On the agenda: a motion to rescind Monday night's vote and move directly into a certification vote on all of the systems awaiting a thumbs-up from the board, including the bar code system activists pushed back on.

It appears board member David Black, who voted Monday to move towards changing state certification requirements, misunderstood what he was voting on. State Board Chairman Robert Cordle said Black thought the change would only apply to future certification decisions and not effect the process three voting machine vendors are in the midst of now.

"It happens some times," Cordle said of the mix up. "He's a very good member."

An attempt to reach Black, the former chairman of the Cabarrus County Board of Elections, was not immediately successful Tuesday.

Thursday's meeting is slated for 11 a.m. at the board's main offices in the Dobbs Building at the state government complex in downtown Raleigh, 430 N. Salisbury St.

County officials make the final decision to buy election machines, but they can only buy machines with federal and state approval. All the machines pending state approval now are federally approved, and State Board staff has advised board members that they meet current state requirements as well.

The board has the power to change those requirements, though, and was poised to do so in the face of public pressure.