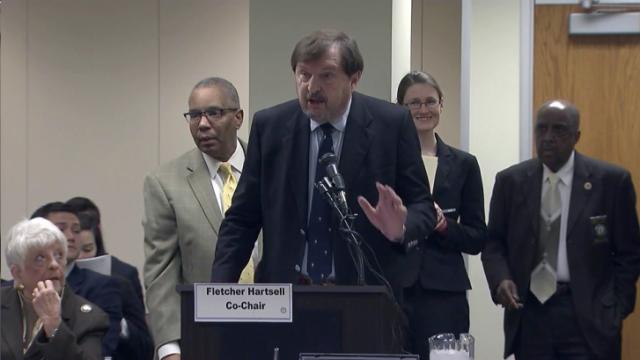 Raleigh, N.C. — More than $600 in shoe repairs, three speeding tickets, magazine subscriptions and tens of thousands of dollars in credit card expenses were among the items that state elections officials say were improper campaign expenditures by Sen. Fletcher Hartsell, R-Cabarrus.

Saying they believed Hartsell deliberately tried to disguise his personal expenditures, members of the State Board of Elections voted 5-0 Wednesday to refer their investigation to state prosecutors in Wake and Cabarrus counties, as well as to all three federal prosecutors in the state. Board members also voted to pursue civil and administrative penalties against the 13-term senator.

Neither of those findings mean that Hartsell is guilty of anything, only that board members found evidence that suggests wrongdoing. However, during several pointed exchanges Wednesday afternoon, it was clear Chairman Josh Howard, a Republican, and his fellow board members were frustrated by what they had found.

"Some of the things in there should make anyone angry," Howard said of the 800-page report that provided the basis of Wednesday's hearing. "Campaign finance disclosures were wholly inaccurate or entirely opaque. At that time, if you're not angry, you're not paying attention. The tie that binds all five of us on this board, Democrats and Republicans, is we have zero tolerance for political corruption, and living off your campaign, which there's reason to believe is going on here, is a form of political corruption."

The board did not release the full report, but a summary presentation used during the hearing was made publicly available.

Hartsell did not attend the hearing – the Senate was debating its budget proposal for 2015-16 on Wednesday afternoon – and did not immediately return a phone call and an email to his legislative office. Howard said the board did not subpoena Hartsell because that could have given him some immunity from further prosecution.

Raleigh attorney Roger Knight represented Hartsell during the three-hour hearing. Knight said that he asked Hartsell to stay away from the hearing, given uncertainty about the proceeding's format and the fact that he couldn't review the elections board's report in advance.

Knight insisted his client wasn't trying to mislead anyone.

"I do know that he firmly believes he used his best efforts and good faith to account for and show how the monies have been paid to his campaign and paid from his campaign," Knight said. "We can disagree about the efficacy of his methodology."

Hartsell is a lawyer and long-serving member of the General Assembly who has the unusual distinction as a serving as a committee chairman under both Democratic and Republican majorities.

Elections Director Kim Westbrook Strach said the state board's investigation into Hartsell was sparked by a newspaper report that questioned a large number of credit card payments on Hartsell's campaign finance reports. Campaign finance law requires candidates to list what they spend their campaign funds on, so merely listing a credit card payment is not the complete disclosure required by law.

That sparked a three-year investigation that eventually required elections board officials to dig through 24 years of reports, conduct 18 hours of meetings with Hartsell and comb through credit card statements.

Candidates are allowed to spend money on expenses related to their campaigns or as a result of holding office. The law also allows them to make charitable contributions. But laws that went into effect Oct. 1, 2006, prohibit lawmakers from spending money on personal expenses.

As detailed by Strach, Hartsell's reports had never been audited by the state board since he first ran, which left years and years of unusual expenditures unchallenged. The state board is supposed to audit all reports after every campaign cycle, but it does not have the manpower to do so, Strach said.

Following are among the potential problems she detailed during her report to the board:

Strach said that Hartsell also argued that the payments for things such as mowing the grass on his and an adjacent property helped maintain his good reputation in the community, which was useful to the campaign.

But board members were incredulous.

"There appears to me to have been an intent to obfuscate what was going on," said Maja Kricker, a Democrat.

The next steps are unclear. It will be up to individual prosecutors to decide whether to take up the case. In addition to questions involving state campaign finance law, prior cases that involved similar issues of personal use of campaign funds raised questions related to federal tax law.

"The State Board of Elections presented an overwhelming amount of evidence today suggesting that Sen. Fletcher Hartsell broke not only the public trust, but North Carolina law," North Carolina Democratic Party Executive Director Kimberly Reynolds said in a statement. "In the face of these allegations, Sen. Hartsell should step down immediately. If not, Gov. McCrory and Senate leadership should call for his resignation. Public office should never be used for private gain. Period."