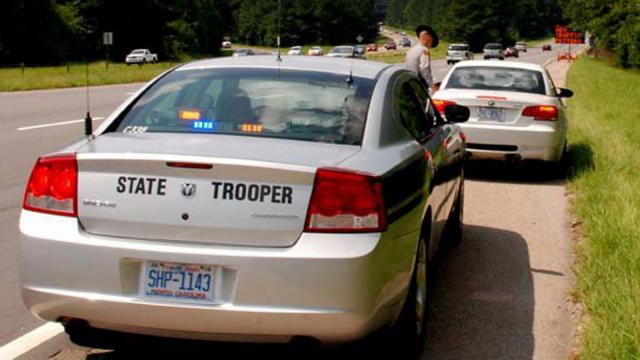 Raleigh, N.C. — The North Carolina Department of Transportation says all 50 states have some kind of "Move Over" law but that 70 percent of drivers don't know about them.

In North Carolina last year, state troopers issued more than 1,400 citations to drivers who violated the law, which went into effect in 2002.

That's why the DOT has launched a new campaign that includes radio spots, billboards and reminders on electronic message boards in Wake County in an effort to get people to pay attention.

"The people who are trying to protect us, we're just asking everyone to think about protecting them," DOT engineer Battle Whitley said Friday. "Very few people work in an environment where a 2,000-pound hunk of metal is going by them at 65, 70 mph."

Under the "Move Over" law, drivers must move over one lane, if possible, or reduce their speed when approaching emergency and public service vehicles – such as utility and towing trucks – with flashing lights stopped on the shoulder of a highway.

When it was first enacted, drivers who violated the rule faced a $25 fine, plus court costs. The penalties got stiffer in 2005, when they increased to $250.

Now, not doing so could result in a $500 fine and possibly something much worse.

Earlier this month, a state trooper was injured along Interstate 95 in Robeson County after a driver sideswiped his patrol car, which was parked along the highway. Last year, near Knightdale, a trooper had a close call on U.S. Highway 64 after he had pulled over on the shoulder.

Elsewhere, a police officer investigating an accident in Nashville, Tenn., was killed last month when a motorhome carrying a trailer hit him on the side of a highway.

The "Move Over" law expanded in 2012 to include utility vehicles and road maintenance operations.

On the national level, traffic crashes and incidents in which a vehicle hits a worker on the roadside are the leading causes of on-duty injuries and deaths for law enforcement, firefighters and towing and recovery personnel.

The DOT is also trying to raise awareness of the state's "Fender Bender" law, which requires drivers to move to the shoulder of the road following minor crashes to help avoid traffic backups and safety hazards. Drivers who don’t follow the law could face a $110 fine and court costs.